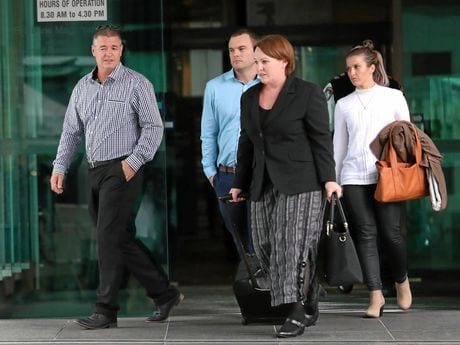 UPDATE: SUNSHINE Coast lawyer Peter Boyce has spoken to the media outside of the Ackerman inquest.

“We think there are ways the game can be rid permanently of the shoulder charge,” Mr Boyce said.

“Everyone who’s been touched by this is finding it difficult to move on.”

EARLIER: LEAGUE authorities may claim to have a “zero tolerance” approach to shoulder-charges, but players are rarely sent off for the offence, an inquest has been told.

Ackerman family lawyer Peter Boyce has been asking why this was the case in Brisbane Coroners Court as authorities looking into the death of Sunshine Coast league player James Ackerman’s death on field.

Mr Boyce asked referee Tyson Brough how many times in his career he had put players on report for shoulder-charging.

The referee said he had done so several times, but never sent anyone off.

“Like a high tackle, you rule on what you see. Each incident is different,” Mr Brough said.

Asked if a send-off should be mandatory for shoulder-charging, Mr Brough said he might agree if that was “one way of getting rid” of the dangerous practice.

Sunshine Coast sports trainer Darren Shipley was 20m from the colliding players.  He went over to check on Mr Ackerman after the collision.

A physiotherapist ran out too. Mr Shipley called for a doctor who was at the ground that day.

“My first thought was that [Mr Ackerman] had a bad neck.”

Mr Shipley said there was “a little bit of celebration from the shot” as the Norths player “shoved James again in the chest”.

Another former Falcons player was asked why after seeing thousands of tackles in his career, he remembered the fatal collision at Norths so clearly.

“It goes through my head on a daily basis.”

He told Mr Lane he frequently asked himself if he could have done more to stop the tackle that “killed my mate.”

“Something like that never leaves you,” a further former Falcons player told the inquest.

He said the fatal collision followed what seemed like an “attempted shoulder charge” by Mr Molo on Mr Ackerman earlier.

On the first occasion, he said Mr Ackerman got up and kept playing because he was a “tough human being”.

IT WAS not a big game, just two teams low down the ladder.

“It sort of had an eerie feeling,” Mr Ackerman’s friend Tyson Brough told the inquest in Brisbane. “You could hear yourself think. There was nothing going on.”

Mr Brough, refereeing that day, had no affiliation with either team, but had known Mr Ackerman since childhood.

“We grew up together … We played junior footy and then went to high school together.”

Soon, his mate would be lying on the ground.

“The game only went for four minutes. That whole day’s in my head. I can remember it all,” Mr Brough said.

Early in the game, the court heard, Mr Molo tried to tackle Mr Ackerman, but missed. The two players collided soon after.

Mr Brough awarded a penalty to the Falcons. Mr Molo remonstrated – but that was to be expected, the referee said.

“It’s rugby league. Your emotions are going to be up in certain situations. It didn’t concern me,” he said.

It wasn’t clear at that stage how badly hurt Mr Ackerman was.

But Mr Brough said the ball came loose – indicating how heavy the hit on Mr Ackerman was.

Mr Molo’s lawyer Peter Lane said both players were running “at full pelt” directly at each other.

“Neither changed direction. Both were big front-row forwards … unsurprisingly it was a very significant collision,” he said.

TOUCH judge Stephen Kanowski, who has some 20 years’ experience, told an inquest he saw Francis Molo “turn his body to the side and perform a shoulder charge” on Falcons player James Ackerman.

“He had his elbow tucked at the side and he made direct contact with James,” he said in Brisbane Coroners Court.

He told counsel assisting the coroner Megan Jarvis he was not aware of any bad blood between the two teams before the match.

After Mr Molo and Mr Ackerman collided, the touch judge said he saw the Norths player “bend over and push” Ackerman.

There was some initial confusion about the nature of the collision.

“I was unsure of point of contact … I had a suspicion the contact was high,” Mr Kanowski said.

Mr Kanowski took the lead with the incident report, as he was concerned for referee Tyson Brough’s well-being.
“Tyson was emotionally affected by what happened,” he said.

Mr Kanowski said he and the referee had met several times since, but never discussed the collision.

The inquest heard Mr Kanowski did not check to see if Mr Molo wanted to review the incident report.

Allegations Norths players were cheering “and high fiveing” each other after the collision were also raised, but not substantiated or clarified.

The court heard there was confusion after the incident, with some Norths players apparently continuing and scoring a try, which was disallowed.

‪Mr Ackerman, 25, was playing for the Sunshine Coast Falcons against Norths Devils when Broncos-contracted player Francis Molo shoulder-charged him in June 2015.

‪At a hearing in May, Deputy State Coroner John Lock heard Mr Ackerman received the ball from a kick off and Mr Molo tackled him.

Broncos CEO Paul White is expected to testify before the inquest, to discuss training around tackling and shoulder charges.

Apart from determining the cause of Mr Ackerman’s death, the inquest is expected to investigate issues including rugby league authorities’ actions in relation to broader player safety issues.

Mr Ackerman’s close friend Tyson Brough will be among those giving evidence today.

Darren “Shippo” Shipley, a Sunshine Coast trainer who was on the field that day, will also be a witness.

As well as calling on league organisations to testify, the coroner will also investigate the actions Queensland Police Service and Workplace Health and Safety Queensland took in response to the tragedy.

Mr Lock will also eventually have to decide if he should make any preventative recommendations to help prevent a similar fatal incident in future.

The inquest will begin about 10am at Brisbane Coroners Court.