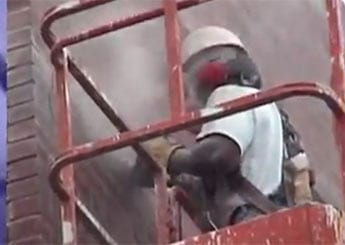 Washington – During a Feb. 15 congressional briefing on OSHA’s final rule on protecting workers from exposure to respirable crystalline silica, Daniel Anna, past president of the American Industrial Hygiene Association, held up a respiratory protection mask.

“For those of you who may not have worn something like this on the job, let me tell you, it’s not a real fun thing,” Anna said.

As Anna and other AIHA officials see it, the final rule’s established engineering controls to limit worker exposure to silica would prevent the need to use a mask throughout an 8-hour shift. It is one of several potential benefits discussed during the nearly hour-long session, which also featured remarks from former OSHA administrator David Michaels and members of Congress.

Crystalline silica is a known carcinogen found in sand, concrete, brick, stone, mortar and other commonly used construction materials. It often surfaces during high-energy operations such as cutting, drilling or crushing rock.

Silica dust also can be found in hydraulic fracturing, foundries, glass manufacturing and landscaping, among other industries, AIHA CEO Larry Sloan said during the briefing. OSHA estimates that 2.3 million workers are exposed to respirable crystalline silica.

Exposure to silica dust can trigger silicosis, an incurable lung disease in which the lungs become scarred and affect breathing. OSHA claims the final rule, issued in March 2016, will save more than 600 lives and prevent more than 900 cases of silicosis each year.

The rule lowers the permissible exposure limit for respirable crystalline silica for all industries to 50 micrograms per cubic meter of air averaged during an 8-hour shift. The rule further covers requirements such as engineering controls, respirator availability and limited worker access.

“As we control these exposures, not only are we preventing [workers] from getting sick on the job, but there’s a significant impact to the off the job,” Anna said. “Healthy workers are healthy citizens, and healthy citizens become more productive as members of their communities, as family members, and provide less of a burden onto the health care system.”

“Once they recognize what controls are being requested and what technology is available that prevents those exposures, the implementation is nowhere near what they expected,” he said.

OSHA presented the rule as separate standards – one for construction and one for general industry and maritime. Both went into effect in June, with industries then having one to five years to meet most requirements. At press time, the construction industry was expected to comply by June 23, and general industry, maritime and hydraulic fracturing industries by June 23, 2018. Hydraulic fracturing will have until June 23, 2021, to meet engineering control requirements.

‘Keep up the fight’

During the briefing, Michaels dismissed concerns that the legislation would decrease the workforce.

“This will not kill jobs,” he said. “But every time OSHA issues a standard, there’s always the [retort], ‘This is going to kill jobs, and we’re not going to be able to work anymore.’ Anyone here go to a dentist recently where they didn’t use gloves?”

Michaels said that although the final rule would cost industry $ 1 billion per year, its annual net benefits were expected to range between $ 3.8 billion and $ 7.7 billion.

“We’re talking about people not dying of cancer and silicosis and having productive lives, and that’s what the benefit is. The benefits are many times the cost,” Michaels said.

“So when I think about workers who are unnecessarily exposed to this when there are ways to mitigate the impact and reduce the exposure, it just seems like a no-brainer,” Shea-Porter said.

Added Courtney: “We look forward to using whatever record that you guys create here today to keep up the fight both in the committee and on the floor.”