Awareness and joint efforts, a must for workplace safety 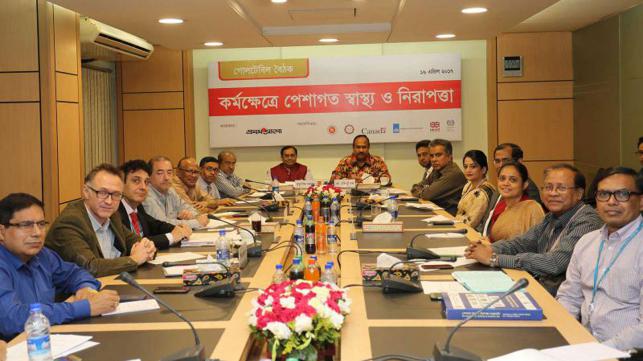 Awareness and joint action by the government, owners and workers can ensure occupational health care and safety at workplaces.

With Occupational Safety And Health (OSH) Day coming up on 28 April, discussants at a roundtable on ‘Occupational Health and Safety at Workplace’ organised by Prothom Alo on Sunday, came up with the recommendation.

Md Mujibul Haque, state minister for ministry of labour and employment, said Occupational Safety and Health (OSH) has become popular in the country. “But we knew very little about OSH previously as we are basically an agrarian society and are new to the industrial society.”

The state minister also said there were a lot of laws in the country related to the issue.

“If it is been implemented fully, that’s not a problem, but it’s not an easy job.

“If we can make the workers, owners and general people aware, we can succeed. People are not aware of about fire safety and other security measures, OSH. After the Rana Plaza tragedy, people became more serious about the matter.

“Inspection cannot be the most important issue. We need awareness. Once awareness is in place, things will be easier,” he added.

Steve Needham, senior communications officer at the Dhaka office of the International Labour Organisation (ILO), said Bangladesh has made remarkable progress in the last few years and the progress continues.

“So many things have already been done but it has not finished as yet. More is required to be done in this regard,” the ILO officer added.

He also said not only the garments sector, but other sectors that can be benefited by this.

“We need to focus on small and medium factories in terms of occupational safety,” he added.

He suggested that trade unions and women entrepreneurs can play important roles in this regard.

Mohammed Nasir, vice president of the Bangladesh Garments Manufacturers and Exporters Associations (BGMEA), praised the women workers who constituted 70 per cent of the 4.4 million garment workers at the beginning.

He also said Bangladesh is a role model in the world concerning safety at the workplace.

“We have already completed 70 of the remediation activities prescribed by the Accord and Alliance Group. The factories are asked to take all safety measures by 2018, and we hope we will be able to take all measures by 2017,” he added

He said the BGMEA is very much amicable with labour issues and has taken it very seriously.

“BGMEA, jointly with the government and BKMEA, is trying to sanction ‘soft-loans’ to ensure safety measures.

“We are continuing training on safety issues as 175 masters, who trained 8000 supervisors, and the supervisors gave training to 800 thousand workers on health issues. We have hospitals in the Dhaka and Chittagong to provide health assistance to the garment workers. There are funds for nursing mothers and thousands of mothers got Tk 500 each from the mother fund,” he added.

If our labour law was implemented, things could be solved. “There is law, but there is no implementation of it.”

It’s true, he said, quoting  the state minister for labour and employment, that the number of the factory inspectors has been increased. But nothing will work until the owners become aware of labour safety.

Mohammad Hatem, vice president of Bangladesh Apparels Federation Association, said, “In term of workplace safety, we are maintaining highest security at our workplaces. But the entrepreneurs and workers are not aware of this health issue. We need to do more.”

He also mentioned that there were some technical problems such as loan conditions and interest rates for the small industries to avail safety funds. If it was made easier, they can benefit from that too.

Nazman Akhtar, president of the Garments Workers Federation (combined), said, “We should be more alert about continuation of the present action plan run by the Accord-Alliance Group after the timeline ends in 2018.”

She demanded increased compensation for workers who fall victim of workplaces accidents.

“Until we stop the foreign version of workplace safety guides, it will not be solved.”

Kutubuddin Ahmed, chairman of Envoy Group, said Bangladesh’s business sector was still being identified with the Rana Plaza tragedy. “We should emerge from this.”

“We see owners are afraid of the trade unions leaders, but it shouldn’t be like that.

“Owners and workers both must work for the occupational safety and health. That is the bottom line,” he added.

He also said industrial development will not be possible ignoring workers.

Public and private models to ensure occupational health and safety can be introduced as participation of the workers through trainings is a must.

She pointed out courage is big problem while the factories are being inspected for the safety issue.

Fazlul Haque, former president of the BGMEA and BKMEA, said, “We must think that profit cannot be the only goal of a business. Workplace safety will be ensured as soon as we will understand its importance.”

“The relationship between trade union leaders and owners must be easier.”

Alberto Sarda, senior labour inspector and OSH advisor said, “We must understand the link between productivity and workplace safety. If workers’ health and social security is ensured, productivity will increase.”