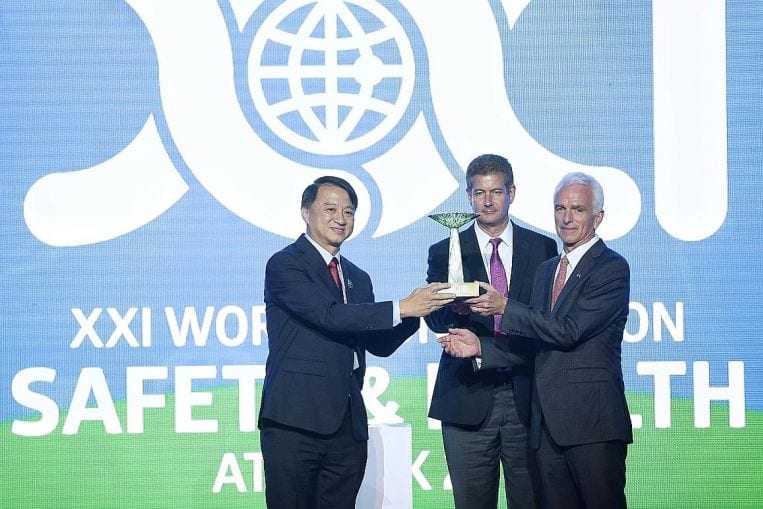 Speaking at the closing of a global workplace safety and health forum yesterday, he outlined the approach countries can take to prevent accidents and reduce fatalities at work.

Each country has to do more, Mr Lim said, citing how Singapore plans to reduce its current workplace fatality rate of 1.9 deaths per 100,000 workers to below 1.0 deaths before 2028. This is an “ambitious target”, but something the tripartite partners – the Government, employers and unions – are determined to achieve, he added.

He expressed the hope that many countries will steadily reduce fatality rates from work accidents over the next decade to less than one death per 100,000 workers.

At the regional level, countries have to learn from one another and work together, Mr Lim said.

Asean labour ministers on Sunday pledged to improve workplace safety for workers in the region.

RACE TO BE SAFE

Together, we must take on the challenge of not just reducing the incidence of workplace injuries and occupational diseases, but to do so at a pace that is faster than the growth of the global workforce.

“As a member of Asean, Singapore will continue to contribute to regional efforts to enhance occupational safety and health (OSH) capabilities in areas such as training of OSH inspectors, building companies’ expertise in risk management, and accreditation frameworks for OSH training providers,” he said.

In addition, a mindset of safety and accident prevention should be embedded in youth to sustain this mission globally. Mr Lim said Singapore is integrating training on workplace safety into the curriculum for tertiary students.

“Even though concerted efforts to improve OSH have raised awareness, strengthened capabilities and forged partnerships, much more still needs to be done,” he added.

He said: “Together, we must take on the challenge of not just reducing the incidence of workplace injuries and occupational diseases, but to do so at a pace that is faster than the growth of the global workforce.”

Only by doing so can countries reverse the trend of such injuries and diseases, and reduce the number of workers affected, he added.

About 3,500 delegates from more than 100 countries are in Singapore for the 21st World Congress on Safety and Health at Work, which ran from Sunday to yesterday.

Yesterday, several delegates also visited 19 companies here to study safety measures that have been implemented in the workplace.

The congress, which takes place every three years, is being held in South-east Asia for the first time.

He expects safety will figure prominently on the agenda of the “top management” of unions and employers’ federations.

At an earlier session on safety in the construction industry, Dr Knut Ringen of the United States’ Centre for Construction Research and Training said safer workplaces would lead to greater productivity and efficiency.

“In order to be productive and efficient you have to really plan carefully what you do and if you do that, safety comes with it,” he said.