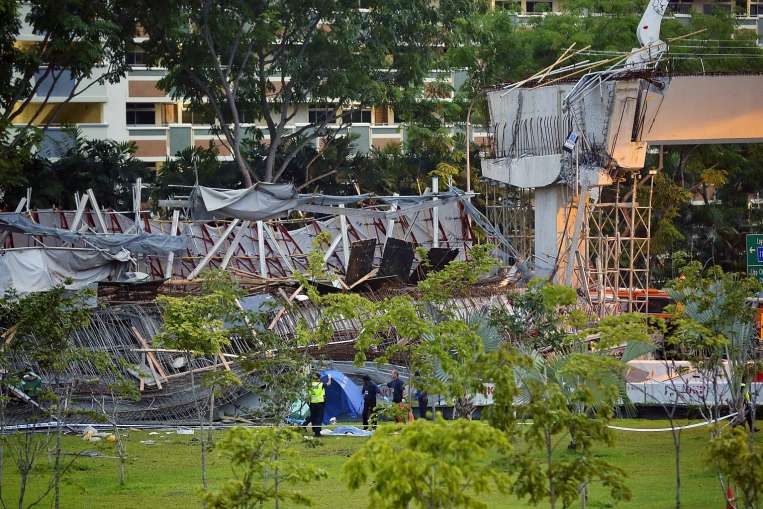 The collapse of a viaduct section in Upper Changi Road East on July 14 that killed one person and injured 10 others was due to a human lapse, Manpower Minister Lim Swee Say said yesterday evening.

“One thing for sure is that this is a man-made incident that could have been avoided if everyone involved in this project had paid enough attention to the design and construction of the viaduct and the safety of workers,” Mr Lim said at the annual Workplace Safety and Health (WSH) awards at Resorts World Sentosa.

Speaking to 1,400 industry professionals, Mr Lim called the incident a “wake-up call” and warned against complacency and taking workplace safety and health for granted.

His comments offered a first glimpse into the outcome of the ongoing multi-agency investigation looking into the cause of the collapse, which claimed the life of Chinese worker Chen Yinchuan.

Mr Lim said: “(Mr Chen) came to Singapore just three months ago to work as a construction worker. It was his first time working in Singapore. He wanted to earn and save more for his three-year-old son, but instead, he lost his life here.”

One thing for sure is that this is a man-made incident that could have been avoided if everyone involved in this project had paid enough attention to the design and construction of the viaduct and the safety of workers.

A preliminary investigation found that the reinforced concrete corbels – supporting structures that protrude from vertical columns and hold up the horizontal beams – had given way. All work at the site has been ordered to stop.

An OKP spokesman said: “The company will continuously strive to adhere to safety requirements for all our projects. We are currently processing injury claims of the workers.”

Added a CPG spokesman: “There are always lessons we can learn from each incident. However, investigations are still under way so we are unable to speculate on the outcomes. CPG Consultants has established systems of internal checks and reviews and we are re-evaluating them as part of our continuous improvement process.”

Both OKP and CPG did not comment on the lapses.

The incident underscored the need to keep the “heat” on companies that do not meet safety standards, but also recognise those that invest in safe workplace practices, said Mr Lim.

At the event, 172 WSH awards were handed out to companies and individuals to recognise good WSH management in their workplaces. Keppel Group clinched 36 awards, the highest number won by a single organisation this year.

In hailing the winners for upholding safety and health in the workplace, extending their WSH responsibilities beyond their own employees and finding innovations in safety, Mr Lim singled out Rockwell Automation Asia Pacific Business Centre. The firm has had zero injuries in the past decade. “The secret of their success lies in paying attention not only to injuries, but also near misses,” said Mr Lim. “Studying near misses can help companies take pre-emptive action so that accidents will not happen.”

CDL Group general manager Chia Ngiang Hong, whose firm received the WSH Developer award for the 10th consecutive year, said: “Our building and construction sector is exposed to high risks, particularly at worksites, and it is of paramount importance that developers and industry stakeholders work closely to help keep our worksites safe.”

WSH Council chairman Heng Chiang Gnee said: “We must not take things for granted and expect that we will go home safe and healthy at the end of each work day. As a reminder, the reality is that 66 workers did not make it home last year.”