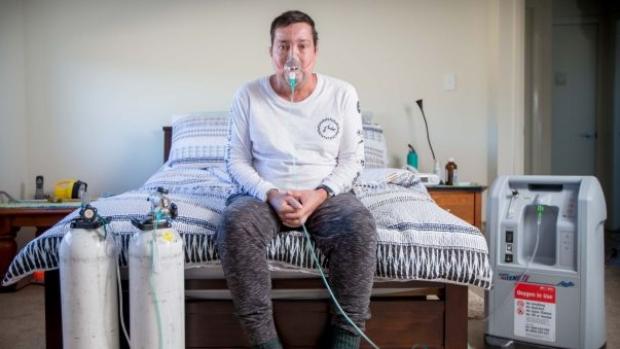 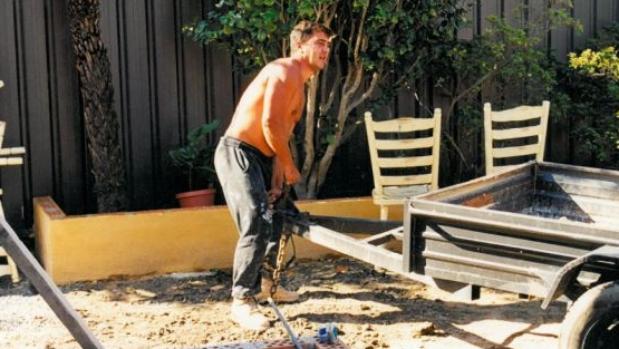 Chris Parmangos when he was younger and working as a brick labourer.

As a young bricklayer, Chris Parmangos had no idea silica dust rising from the Sydney sandstone and bricks he worked with would cost him his health.

Parmangos was about 33, and 15 years into his job as a labourer in Sydney, when he was diagnosed with early signs of lung disease from exposure to silica dust. Silicosis is potentially deadly and can have a shorter latency period than asbestosis, another dust disease, which can take decades to surface.

Now aged 49, Parmangos is on oxygen and rarely leaves his house in Port Macquarie. His hands are clubbed and he has frequent stays in intensive care because of “non-stop lung infections and pneumonias” as a result of his failing immune system.

Parmangos was about 15 years into his job as a labourer in Sydney when he was diagnosed with lung disease from exposure to silica dust.

“We didn’t even know what silica was till I got sick,” he said.

“Being young, you always thought you are young and healthy and nothing is going to happen to us.”

Sydney respiratory physician Dr Anthony Johnson, who addressed the parliamentary inquiry, told Fairfax Media he and other doctors in Sydney and Melbourne have reported a growing number of silicosis cases.

“It’s a disease we saw quite commonly in the 1940s, ’50s and ’60s in people who were jack-hammering Sydney sandstone,” said Johnson who is a member of the Thoracic Society of Australia and New Zealand.

“Control measures were introduced, mainly just putting water on the process to keep the dust down and with those measures, it basically disappeared.

“But in the last five years, we have seen quite a number of cases from the artificial stone industry where people are working with things like caesarstone making kitchen benches.”

The Medical Journal of Australia last month published an article by Johnson and five colleagues from Sydney hospitals on a serious silicosis case from workplace dust exposure.

Despite a global downard trend, the article said “new outbreaks of silicosis have recently been reported, with life-threatening silicosis occurring after exposure to a relatively new type of engineered stone product used for kitchen and bathroom benchtops.

“In almost all reported cases, there was little adherence to basic protection measures, such as provision of appropriate ventilation systems and use of personal protective equipment,” the article said.

“Our case reaffirms the need for vigorous enforcement of dust reduction regulations, particularly in the growing industry of engineered stone products.

“Benchtop stonemasonry is a potentially dangerous occupation, and medical practitioners should have a heightened awareness of this newly described occupational hazard.”

When slabs of engineered stone are cut and finished with an angle grinder to fit a kitchen bench or bathroom, clouds of silica particles are released and if inhaled, can lead to silicosis.

Susan Miles, a respiratory and sleep physician who lectures at the University of Newcastle’s school of medicine and public health told the inquiry there is no centralised process or system for collection of information on occupational lung disease in New South Wales, unlike other countries.

“This is a disease that is 100 per cent preventable if we have safe workplaces, but attacks on union rights and the dismantling on state industrial inspectors has put lives at risk,” he said.

“Twenty years ago, unions and inspectors would have shut down unsafe workshops.”

Theodora Ahilas from Maurice Blackburn Lawyers, who addressed the parliamentary committee, said her firm has a number of new clients with silicosis, including three last week.

A spokeswoman for icare​, the NSW government’s insurance and care services provider, said silicosis is covered by the Dust Diseases Scheme and is compensated if attributed to workplace exposure while working in NSW.