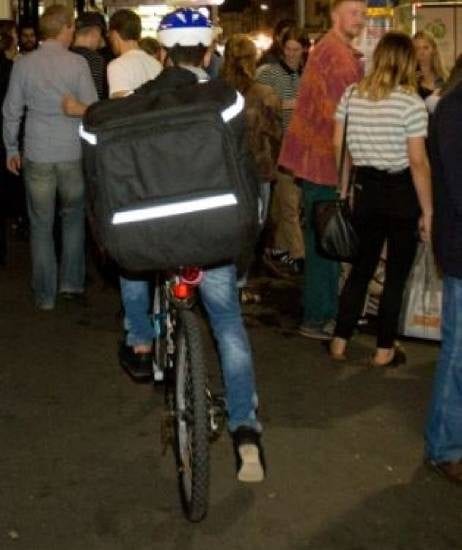 Meal delivery companies such as Deliveroo and Foodora offer its cycle couriers the flexibility to work when and where they want.

However, some food delivery riders appear to take a flexible approach to road rules.

Fairfax Media observed Deliveroo and Foodora riders cycling on busy footpaths, ignoring red lights and checking phones in traffic in the Sydney suburbs of Surry Hills and Newtown on a Friday night.

The workplace health and safety regulator, SafeWork NSW, received a complaint about Deliveroo riders riding without lights at night in the Sydney CBD in 2016.

“They’re regularly running red traffic lights, at night, without lights,” according to the complaint.

A bicycle is considered a vehicle and riders are obliged to follow the same road rules, while the law requires employers to ensure the safety of its workers.

More than 1900 cyclists were seriously injured on NSW roads in the 12 months to September 2016, according to a Transport for NSW spokesman.

“Delivery riders, like all road users, have an obligation to follow the rules to ensure their own safety and those of others on our roads,” he said. “The organisations they work for also have a responsibility to educate and encourage safe riding by their employees.”

The chief executive and co-founder of Foodora Australia, Toon Gyssels, said the company did not make compromises on safety.

“We [pro-actively] work with authorities and bicycle communities across Australia to ensure bicycle safety on the road,” he told Fairfax Media.

Mr Gyssels said the company had an “extensive safe riding policy” that it required its contractors to follow: “This includes all the official road rules, and more.”

He also said delivery riders were required to pass a test that addressed perils on the road as well as an assessment of skills and the “technical appropriateness” of their vehicle.

A Deliveroo spokeswoman said in a statement that the safety of all road users is of utmost importance.

“Our rider training program includes a written test on NSW road rules that must be passed by riders and we operate a zero-tolerance policy towards any riders who are found to have broken the law,” she said.

Many Deliveroo riders also carried identification numbers on their backpacks or carrying containers, she added.

But questions remain about the safety procedures of Deliveroo and Foodora and whether these companies provide adequate training for their riders, many of who are international students and backpackers.

Fairfax Media reported in March that former Deliveroo riders were concerned about the companies’ approach to safety.

Douglas Williams said he trained alongside backpackers and international students, some of whom did not appear to speak English.

“There were people who I don’t believe could have read road signs, let alone be familiar with Australian road rules,” he said.

Alison Millward said being a bicycle delivery rider was a “pretty dangerous job”.

“My parents gave me insurance for Christmas because they were worried about me,” she said. “They got me an ambulance membership.”

Meal delivery companies also face a legal challenge from cycle couriers who claim they should be considered employees and entitled to minimum rates of pay, holidays and sick leave.

“They also have questions about who is liable and whether they are covered by insurance if they are involved in an accident while they are working,” said Daniel Victory, a lawyer at Maurice Blackburn.

The gig economy faces a number of legal challenges in Britain, The Guardian reports, with cycle couriers and Uber drivers successfully arguing they were employees, not independent contractors, and were thus entitled to employment rights such as minimum pay, holidays and sick leave.

Deliveroo riders in Britain are also planning legal action against the company in pursuit of similar employment conditions.

In the United States, a few smaller companies in the gig economy are classifying workers as employees, not contractors, on the basis that it lowers turnover and improves the quality of their work, according to The New York Times.

Tony Sheldon, the national secretary of the Transport Workers Union of Australia, drew a link between low rates of pay and workers taking risks.

“Any transport worker including riders paid low rates on a per delivery basis forces them to make their deliveries quicker in a stressed state which ultimately puts their safety and the safety of other road users at risk,” he said.