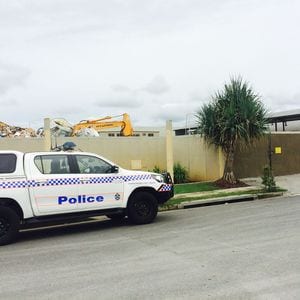 UPDATE: Police say the man who was crushed to death at an industrial estate at Coolum Beach this morning was a 42-year-old Coolum resident.

Businesses surrounding the Recycling Centre in Link Crescent were in shock to hear of the fatal accident.

Two of the business employees next to the site advised they had no idea anything had happened.

“The first we knew something was going on was when ambulance and police were going down the street,” a woman, who asked to remain anonymous, said.

A Clayton’s Towing truck had pulled up at the site and was allowed into the property by police.

Some people, believed to be employees, were seen consoling each other outside the site.

Tributes have been left on Facebook for the man killed.

Jim Hammond wrote, “Terrible that someone who went to work won’t come home to family and friends.”

“Deepest sympathies to his family and friends. May he RIP,” Darlene Johnson added.

UPDATE: The entry gates to the Recycling Centre at Coolum Beach are closed and police crews are still on scene after an employer was crushed to his death this morning.

Police gave a brief statement to media earlier advising attempts to perform CPR were unsuccessful and the man had died.

Police confirmed the man was an employee at the site.

A Workplace Health and Safety spokesman said a full investigation would be carried out.

“A man became trapped in the engine bay of a truck when the over cab fell on him,” the spokesman said.

UPDATE: A man has died in an industrial accident on the Sunshine Coast, Workplace Health and Safety have confirmed.

Emergency services were called to a business, believed to be The Recycling Centre, on Link Crescent, Coolum Beach around 9.19am today.

“A man became trapped in the engine bay of a truck when the over cab fell on him,” a Workplace Health and Safety spokesman said.

A full investigation will be carried out by the department as to the cause of the incident.

UPDATE: A man was working under a truck cabin at Coolum Beach this morning before he became trapped underneath the vehicle.

Paramedics are still attending to the man at the work site on Link Crescent, and have not yet reported any injuries or his condition.

Workplace Health and Safety will investigate the incident.

UPDATE: Paramedics are tending to one person who was reportedly trapped under a truck cabin this morning.

Two Queensland Fire and Emergency Service crews rushed to the scene at Coolum Beach, and firefighters have freed the person from the truck.

The incident was reported at 9.19am at Link Crescent.

It is not yet clear whether a crash caused the person to become trapped.

BREAKING: A person is reportedly trapped under the cabin of a truck in Coolum Beach.

Emergency crews are rushing to the scene on Link Crescent after the report before 9.30am.