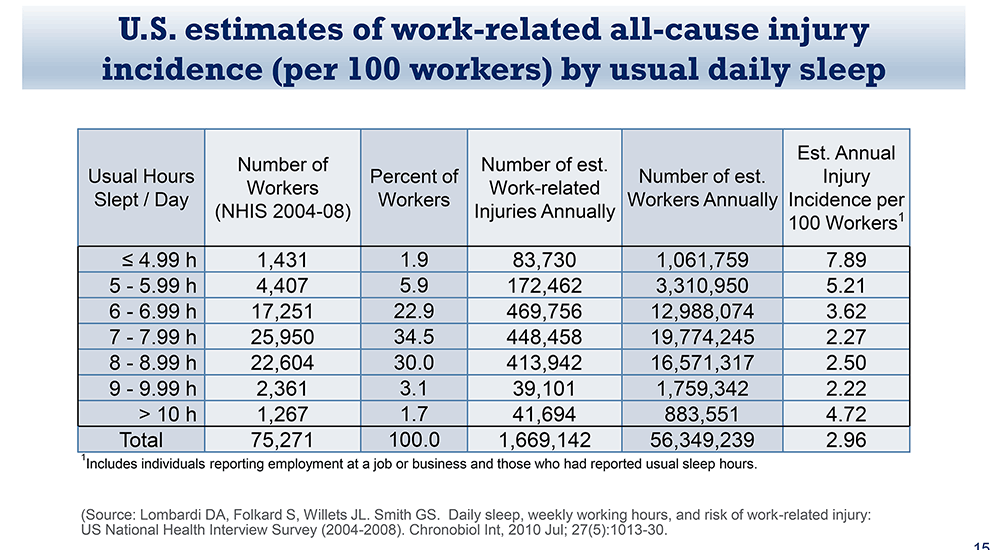 When his first daughter was born, Steve Marks was juggling two jobs.

From 10 a.m. to 6 p.m., Marks was a nurse manager at a casino medical unit. When his shift ended, he slept an hour or two before moving on to his other job as a hospital supervisor from 11 p.m. to 7 a.m. two nights a week. Afterward, he drove back to his first job, where he curled up under his desk for an hour-long nap.

“When you’ve got bills to pay and things that have to be done, children or parents or other things keeping you up, sleep is the last thing that gets paid attention to,” he said. “It’s like, ‘All right, I can deal with this. Let me just close my eyes for a couple minutes and I’ll get back to it.’ That doesn’t make up for the loss [of sleep].”

Employers are becoming increasingly aware that fatigue is a safety issue, Olszewski said, and they, along with workers, play a role in tackling the problem.

“The key is the proactive piece, driving it from the top down, talking about fatigue, how it can be managed, how can it impacts all aspects of life – not just work,” she said.

A 2012 guidance statement from the American College of Occupational and Environmental Medicine defines fatigue as the body’s response to sleep deprivation or lengthy physical or mental hard work. Risk factors related to occupational fatigue include long work hours, a heavy workload, lack of sleep, environmental factors and medical conditions.

Even dealing with other people can result in fatigue, one researcher notes.

“You can be fatigued simply if you go to work and have really poor social interactions with your co-workers – it’s not just about how much sleep you get,” said Matthew Hallowell, associate professor of construction engineering at the University of Colorado Boulder.

Hallowell led a review of literature about causes and outcomes of occupational fatigue, which was published in the Journal of Occupational and Environmental Medicine in October.

Effects of fatigue can include slower reaction time, more errors and decreased cognitive ability. Fatigue can occur in all industries, but numerous studies have focused on its effects on shift workers, health care workers and drivers.

“The industries that are at highest risk would be those where people are working long hours, overtime, many days in a row, when they’re exposed to harsh environmental conditions, like working outside in the rain, snow,” Hallowell said. “Environmental conditions can include things like noise or vibration, really heavy mental task loads for long periods of time. You can extend to what industries that defines, like electrical transmission and distribution line workers, or people who drive snowplows.”

In addition, many people work multiple jobs, leaving them vulnerable to fatigue. People who work several jobs get 40 minutes less sleep per day than those who work one job, according to David Lombardi, principal research scientist at the Center for Injury Epidemiology at the Liberty Mutual Research Institute for Safety in Hopkinton, MA. Lombardi presented this data during the Dec. 13 “Fatigue Blue Ribbon Panel” in Chicago, hosted by the National Safety Council.

“Fatigue is an increasing health and safety problem in our daily lives due to the 24-hour society with decreasing emphasis on sleep,” Lombardi said.

Lombardi and researcher Simon Folkard, of the Université Paris Descartes, have published a risk index to estimate injury risk related to work schedules. Type of shift, number of consecutive shifts, hours worked per shift and rest breaks influence risk, Lombardi said. Risk was 31 percent higher among night shift workers than morning shift workers; by the fourth consecutive night shift, risk was 36 percent higher than on the first night, and risk nearly doubled by the 12th hour of work. However, injury risk decreased by nearly 50 percent after any length of rest break.

“An important message of our approach is that various features of a shift work schedule – beyond only working hours – need to be considered in combination when assessing the safety of a given work schedule,” Lombardi said.

The estimated annual injury incidence rate per 100 workers is 7.89 for U.S. workers who usually sleep less than five hours per day, compared with 2.27 per 100 workers among those who tend to sleep between seven and eight hours, according to research from Lombardi and others, using data from the National Health Interview Survey.

Medical and lifestyle interventions, as well as work organization factors, can help promote alertness, according to a 2012 American College of Occupational and Environmental Medicine guidance statement on fatigue risk management in the workplace. Organizations in which employees work long hours or at night – especially those with safety-sensitive jobs, such as in the energy, health care and transportation industries – can benefit from addressing fatigue.

Key defenses of a fatigue risk management system are:

Although workers are responsible for being well-rested, managers should provide information, motivation and resources, ACOEM states.

In addition, workers should be educated about issues, such as fatigue-related hazards; sleep disorders; how to get adequate and quality sleep; how to recognize fatigue; the importance of diet, exercise and other health conditions; and alertness strategies, including designing workplaces with bright light, cool temperature, non-monotonous noise and low humidity.

In July, the National Safety Council launched an initiative on occupational fatigue. “Aside from just an increase in workplace risk, there’s also long-term economic consequences,” said Emily Whitcomb, senior program manager of the initiative. “NSC is tackling fatigue because as we’re working toward eliminating preventable deaths, fatigue is one of the larger issues.”

NSC has gathered research with the aim of identifying best practices; conducting a national survey; and releasing a cost calculator, policy toolkit and other educational resources.

“Fatigue has always been a problem – there’s always been shift work, people have always not gotten their full night’s rest,” Whitcomb said. “It has started to come to light more in the past 20 years, when the research really started showing it was causing unsafe work practices, when it was increasing risk in the workplace.

“Probably in the last 10 years, as we’ve looked more at wellness in the workplace, it’s gotten a lot more attention. A lot more employers are wanting to address fatigue in the workplace because they’re starting to see those increased risks and lack of productivity from those employees who are fatigued.”

Although workers can help prevent fatigue through measures such as taking breaks and adopting better sleep habits, employers also can help combat the issue.

A November report from RAND Europe, part of the nonprofit research organization RAND Corp., concluded that lack of sleep results in a 13 percent increased risk of death and the loss of 1.2 million workdays per year in the United States. The report offers the following recommendations for employers:

According to a Liberty Mutual report, recommendations for scheduling include:

Supervisors should be alert for signs of excessive fatigue among workers, such as yawning, head dropping, and difficulty remembering or concentrating, according to the statement from ACOEM.

Technology also can be used to monitor fatigue. For example, Chicago-based USG Corp., a manufacturer of construction materials, placed sensors in its trucks to monitor operators after one dozed off behind the wheel, resulting in the truck traveling up a berm and its load tipping over. The operator – who had worked more than 55 hours the previous week and was helping his family with another job – was uninjured, Justin Dugas, safety and health director at USG, said during the NSC panel. (USG is a member of the Campbell Institute at NSC.)

The sensor tracks an operator’s eye movements and sends alerts through a loud buzzing or vibration of the seat when distracted driving or sleep is detected. Video footage is sent to a monitoring center for analysis.

During the initial months after the sensors were installed, two or three fatigue-related incidents occurred daily. They decreased to two or three per week, then one or two per month, Dugas said.

“[It’s] significant improvement in terms of fatigue events, and this is now, as a result, part of our standard equipment specification for all our haulage units,” he added.

Even if a company does not invest in a complex management system, it can share messages about fatigue, such as the importance of not consuming alcohol before bedtime.

“These are little things that can come out in toolbox safety talks, little five-minute lectures on a topic to pass on the information,” Marks said.

Other ways to mitigate worker fatigue include moving safety-sensitive work to other employees or another time to take advantage of alertness, taking breaks, ingesting caffeine and changing environmental factors, according to ACOEM.

“Being cognizant of how the workplace is set up, how the work is handled, will help improve some of those issues,” Marks said.

“The things that can help: Improving lighting, making sure the temperature is cooler – especially at night – minimizing humidity, noise, vibration. As employers are looking at reengineering workplaces or building new ones, these are things that can be put in place at the beginning or during retrofit to help minimize some of these situations.”