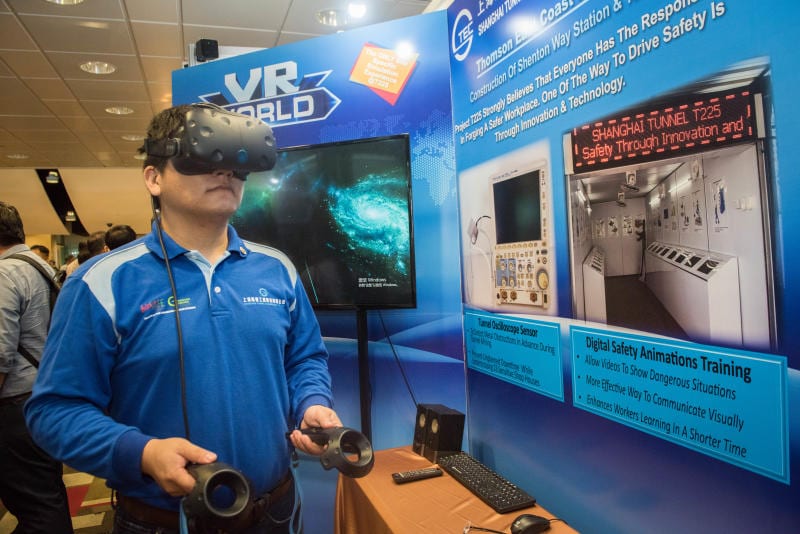 SINGAPORE – A helmet that vibrates when the wearer is within 1.5m of heavy machinery, and an exoskeleton that helps workers carry heavy equipment.

These were some examples of innovation used at work sites presented on Thursday (Sept 6) at the Land Transport Authority’s (LTA) Annual Safety Award Convention, where the theme this year is Safety Through Innovation And Technology.

LTA chairman Alan Chan said in his opening speech at the event: “Technology can help reduce human errors resulting in workplace accidents and improve workforce competency. This is why we have to constantly find new solutions to our problems.”

The top award, the LTA Contractors Challenge Shield, went to Shanghai Tunnel Engineering Co (Singapore) for its work on the construction of Shenton Way station and tunnels for the Thomson-East Coast Line.

The company said it has the only site-specific virtual reality (VR) training centre in Singapore, which means a VR simulation was specially created for tunnelling work at the Shenton Way site.

The site’s project director, Mr Khor Eng Leong, who is also the firm’s managing director, said of the initiative: “It’s a very good tool for workers to experience the (site) environment. For example, you can even experience vibrations to simulate an electric shock.”

He added that about 150 workers have gone through the simulation and there are refresher sessions every six months. However, he declined to reveal the cost of the technology.

To encourage companies to leverage technology, LTA will also introduce the Construction Safety Innovation award at next year’s convention, to recognise contractors who proactively use innovation and technology to enhance project safety.

SBS Transit won the excellence award for Safe Rail Line Of The Year for the Downtown Line, with SMRT Trains bagging the merit award for the Circle Line.

The excellence award for Safe Bus Operator Of The Year went to SBS Transit for the Bedok bus package, while Go-Ahead won the merit award for the Loyang bus package.

A bus package includes the suite of bus services run under the company.

To be eligible for the rail award, the line must not have had any fatal rail accidents during the qualifying period from April 2017 to March this year, as well as pass the operating performance standards.

The bus award requires the bus package to have fewer than 0.75 accident per 100,000 bus-km, and not have any bus accidents resulting in fatalities during the qualifying period.

Mr Chua Chong Kheng, LTA’s deputy chief executive for infrastructure and development, said of the new award category: “Beyond recognising contractors that have achieved safety excellence, it is timely that LTA also recognises the contributions of our public transport operators towards ensuring a safe workplace and commuting environment.”

A total of 30 contractors and operators were recognised at this year’s convention, which is in its 20th edition.