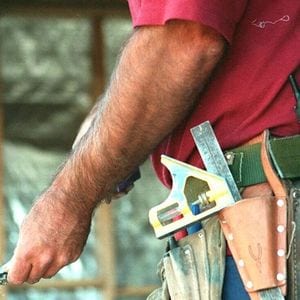 UPDATE: JAMES Hardy Asia Pacific general manager Conrad Groenewald says the company has offered support to the family of a man killed in a workplace accident.

The 63-year-old employee was crushed in a scissor lift at the Carole Park facility about 1.24am Saturday.

He died at the scene.

In a statement released Saturday afternoon, Mr Groenewald said he was personally devastated by the news of the man’s death.

“The 63-year-old male employee had 10 years’ experience working with us at Carole Park,” he said.

“Based on advice from the authorities, we are unable to release the employee’s name at this time.

“We have been in contact with the family and have offered whatever assistance they need.

“Our hearts go out to his family and friends, and to our own employees who are also in deep shock at this tragic incident.

“I am personally devastated by (Saturday’s) event.

“We have a counsellor on site to offer assistance to our employees.

“We have shut the plant down and it will remain closed until we deem it is appropriate to restart taking into account consideration of our employees and any directions from Workplace Health and Safety Queensland (WHSQ).”

Mr Groenewald said James Hardie would fully co-operate with the investigation into the accident.

EARLIER: INVESTIGATIONS are under way after a 63-year-old man was crushed to death in a workplace accident early Saturday morning.

The man was killed about 1.24am after being crushed in a machine used to sort and pack timber.

A Queensland Ambulance spokesperson said the man died at the scene.

A spokesperson from Workplace Health and Safety Queensland said investigations had started into the death, which occurred at the James Hardie facility on Cobalt St, Carole Park.

“In the early hours of this morning a man sustained serious cranial crushing after an incident involving a scissor lift device,” he said.

“Workplace Health and Safety is investigating the incident and we have an investigator, an engineer and an inspector on site.”

INITIAL: A MAN, believed to 63, has died in an industrial accident in Carole Park.

Police and ambulance officers were called to a Cobalt St business at 1.24am after a workplace accident.

A Queensland Ambulance spokesperson said the man’s injuries were such that he did not survive.

“The patient was determined to be deceased on scene,” the spokesperson said.