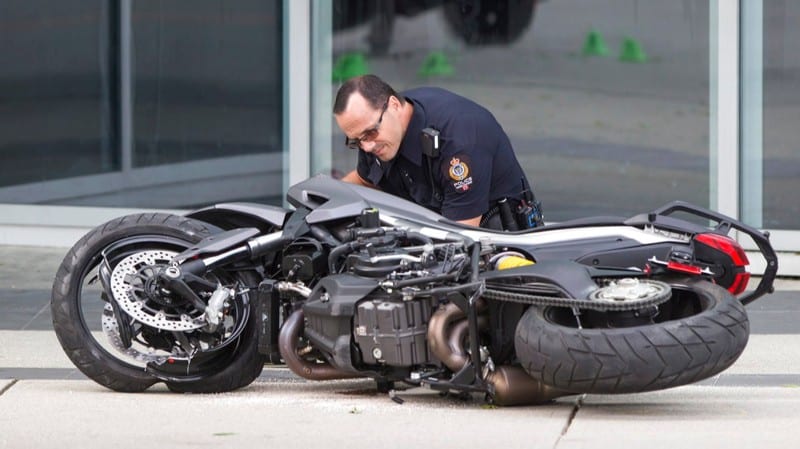 The stunt performer who died on the Vancouver set of “Deadpool 2” after a motorcycle crash has been identified as Joi “SJ” Harris, Deadline reported Tuesday. Although she is not a member, the Alliance of Canadian Cinema, Television and Radio Artists confirmed her identity to Deadline.

The Vancouver Police Department posted about the death on Twitter Monday afternoon.

A stunt driver has died on the set of Deadpool during a stunt on a motorcycle. VPD & @WorkSafeBC investigators are at the scene.

Harris had been considered the first  African-American female professional road racer, according to Deadline. She had been rehearsing the stunt all day, according to a source close to the situation.

Global News TV crews saw the accident, and the outlet reported that Harris was on a motorcycle “when something went wrong, sending the motorcycle airborne and crashing through the glass of the Shaw Tower ground floor studio around 8:20 a.m.”

Witness Sharmina Kermalli told The Vancouver Sun that glass was falling on the body of the woman in the accident.

The Associated Press reported that a crumpled motorcycle was seen lying on its side where the accident happened.

CTV News reported that Harris was loaded into an ambulance that drove away without sirens or lights after being at the scene for 45 minutes.

“We are deeply saddened by the accident that occurred on the set of ‘Deadpool 2’ this morning. Our hearts and prayers are with the family, friends and colleagues of our crew member during this difficult time,” a spokesman for 20th Century Fox, the film’s studio, said in a statement.

A police officer examines a motorcycle after a female stunt driver working on the movie “Deadpool 2” died after a crash on set, in Vancouver, B.C., on Monday Aug. 14, 2017. Vancouver police say the driver was on a motorcycle when the crash occurred on the movie set on Monday morning. (Darryl Dyck/The Canadian Press via AP) Darryl Dyck/AP

The film’s lead actor, Ryan Reynolds, posted a statement on Twitter Monday evening about the death.

“Today, we tragically lost a member of our crew while filming ‘Deadpool,’” he wrote. “We’re heartbroken, shocked and devastated … but recognize nothing can come close to the grief and inexplicable pain her family and loved ones must feel in this moment. My heart pours out to them — along with each and every person she touched in this world.”

Related: Ryan Reynolds speaks out after stuntwoman dies on set of ‘Deadpool 2’

“I’m deeply saddened by the loss of one of our stunt performers today,” director David Lynch said in a statement, according to The Hollywood Reporter. “No words can express how I and the rest of the Deadpool 2 crew feel about this tragedy. Our thoughts are with her family, friends and loved ones in this difficult time.”

“Deadpool 2” is the sequel to the February 2016 film based on the Marvel comics superhero Deadpool, starring Reynolds, who plays the snarky titular character. The sequel is set for release June 1, 2018, but production on the film was immediately shut down after Harris’ death. There is no word on if the halt with affect the release date.