Minority workers have the highest risk for injury, disability: study 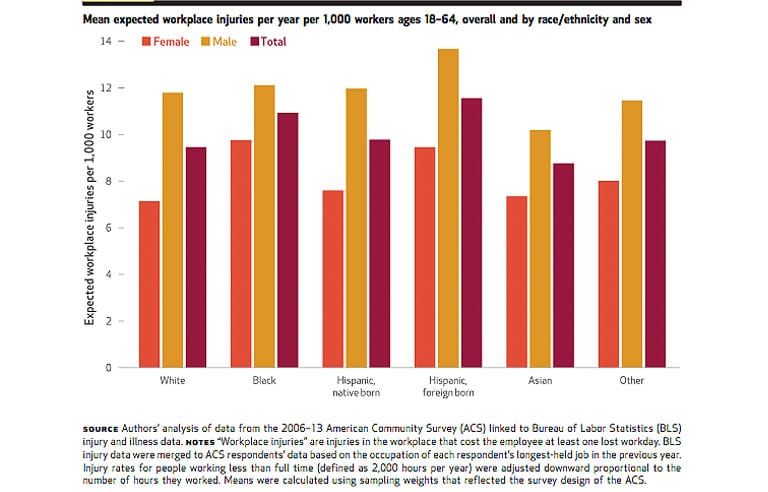 Los Angeles – Latino immigrants and African-American men are most at risk for being injured on the job, according to a study from the University of Southern California.

They found that foreign-born Latino men 18-64 years old have the highest average rate for workplace injuries, at 13.7 per 1,000 workers. African-American men were second at more than 12, then native-born Latino men at nearly 12, white men at 11.8 and Asian Americans at nearly 10. Other ethnicities have a rate of about 11.

“We found that their risk was higher even when we accounted for education and other demographic characteristics,” lead study author Seth Seabury, director of the Keck-Schaeffer Initiative for Population Health at the USC Schaeffer Center for Health Policy and Economics and Keck School of Medicine of USC, said in a press release. “Disparities in economic opportunities for minorities lead them to take more hazardous jobs that raise their risk of injury and disability.”

Higher workplace injury risk is connected to a higher disability risk, particularly for workers 50-64 years old, the researchers said. In this age range, African-Americans have a 4.4 percent rate of work-related disability, foreign-born Latinos were at 4.2 percent, Asian Americans at 4 percent, native-born Latinos at 3.5 percent and whites at about 2.5 percent.

The study was published in the February issue of the journal Health Affairs.