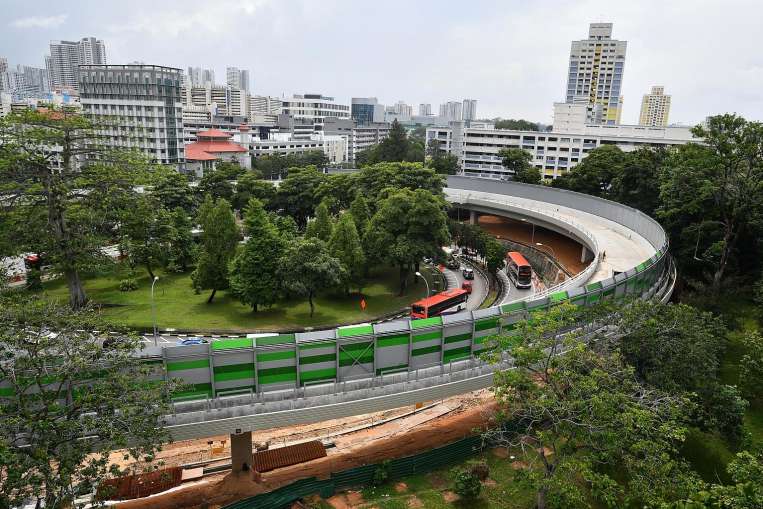 The Ministry of Manpower (MOM) has issued a stop-work order against Singapore firm Feng Ming Construction (FMC), the main contractor of the Braddell Road flyover project, after a random spot check on Feb 23.

This means the completion date for the flyover project, designed to ease congestion around Braddell Road, will be pushed back from end-March.

In a reply to The Straits Times, an MOM spokesman said: “MOM discovered that shoring was not provided at excavated areas when required and the excavation (works) were not constructed in accordance with the professional engineer’s design.

“Materials were placed on excavation struts, which exposed persons working below to the risk of being hit by falling objects.”

The inspection did not come about because of an incident, The Straits Times understands.

The project was initially slated for completion in end-2015. The completion date was pushed to the end of last year, before the promise of an opening at the end of this month.

The duration of the stop-work order (SWO) depends on how long it takes the company to rectify the safety breaches.

MOM discovered that shoring was not provided at excavated areas when required and the excavation (works) were not constructed in accordance with the professional engineer’s design.

“Once MOM is satisfied that all has been resolved, the stop-work order will be lifted,” the spokesman said.

The Land Transport Authority (LTA) has not fixed a date for the completion of the project, a spokesman said. It had previously insisted the project was still on track for completion this month.

Responding to queries, the LTA confirmed that the project will be delayed and said it will work with FMC to fix the safety lapses “so that work can resume as soon as possible”.

Its spokesman said: “Construction of the flyover has been challenging as works are being done during limited hours to minimise traffic disruption to commuters, as well as noise and dust disamenities to nearby residents.” The LTA will announce the revised opening date for the flyover after further assessment, he added.

The public works project has had a rocky path since it began in 2012. The first contractor, Hexagroup, won a $ 29 million tender but ran into financial difficulties.

When they said the flyover will be completed by March, I thought that we won’t have to sweep our floor daily of construction dust for long. Now, there isn’t even a date to look forward to.

MR FRANCIS CHUA, a retiree who lives near the work site.

This led to a temporary stoppage of work, ending hopes of meeting the initial completion target. Hexagroup is now in the process of winding up.

A second tender, for $ 29.9 million, was awarded to FMC in 2015. Works were expected to be completed by the end of last year – but the deadline was again extended, this time to March. This was partly owing to problems associated with the handover from Hexagroup, a source in FMC previously told The Straits Times.

FMC could not be reached for comment about the SWO.

The project includes the construction of a single-lane flyover to directly connect vehicles turning right from Lorong 6 Toa Payoh with the Braddell underpass towards Paya Lebar, without their having to join traffic heading towards the Central Expressway.

Braddell Road will also be expanded from its dual three lanes to a dual five-lane carriageway. Two new pedestrian bridges will connect Bishan and Braddell.

When The Straits Times visited the site last week, sections of the flyover looked unfinished and parts of the new pedestrian bridges were still missing.

Residents in the 10 blocks near the work site were frustrated when told of the delay, complaining about the dust and noise.

Retiree Francis Chua, 65, said: “When they said the flyover will be completed by March, I thought that we won’t have to sweep our floor daily of construction dust for long. Now, there isn’t even a date to look forward to.”