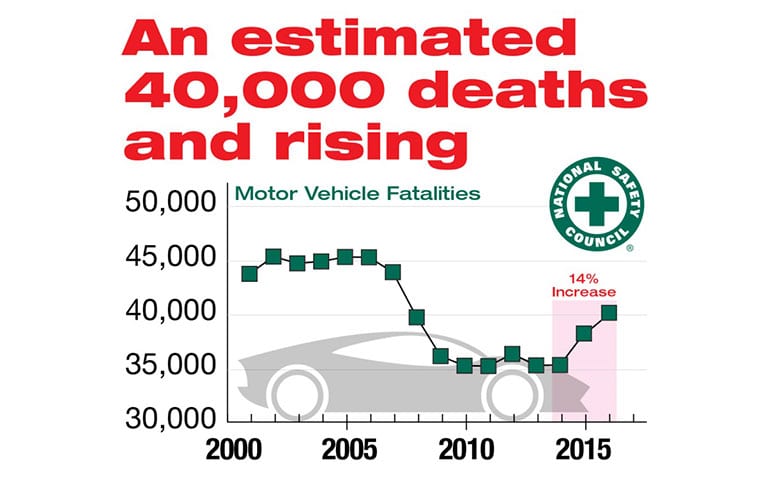 The National Safety Council has released preliminary data showing that as many as 40,000 people were killed in motor vehicle crashes in 2016. The figure is 6 percent higher than the number of fatalities in 2015 and marks a 14 percent increase from 2014 – the largest two-year spike since 1964. This estimate indicates that 2016 may have been the deadliest year on U.S. roadways since 2007.

NSC also released the results of survey that found 83 percent of participants believe driving is a safety concern. However, many participants admitted they are comfortable engaging in unsafe or distracting acts, including speeding (64 percent), texting manually or through voice controls (47 percent), driving while impaired by marijuana (13 percent), or driving after they felt they had consumed too much alcohol (10 percent).

To combat this issue, NSC has launched the Road to Zero coalition with the goal of ending roadway fatalities within the next 30 years.

“Our complacency is killing us,” Deborah A.P. Hersman, president and CEO of NSC, said in a press release. “Americans believe there is nothing we can do to stop crashes from happening, but that isn’t true. The U.S. lags the rest of the developed world in addressing highway fatalities. We know what needs to be done; we just haven’t done it.”

Organizations including the Governors Highway Safety Association are eager to assist in the mission of ending preventable deaths on roadways. In a Feb. 15 statement, GHSA declared NSC’s estimates “a call to action for the highway safety community.”

“The good news is we know what works to save lives – high visibility enforcement of strong traffic laws coupled with public education and awareness,” the statement reads. “At the same time, state highway safety offices need the flexibility to try new approaches and strategies to administer the federally funded programs.”