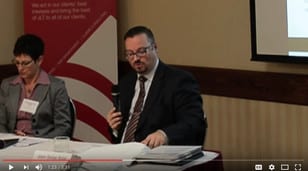 By the Numbers: 2016 WSIB Statistical Report highlights trends in Ontario for work-related injuries and illnesses, as well as recovery and return-to-work outcomes. The WSIB updates the report annually.

“Safe, healthy workplaces are in everyone’s best interest,” said Tom Teahen, WSIB president and CEO. “By the Numbers opens a window into overall workplace health and safety in Ontario, letting you see areas that are performing well and those that need improvement.”

Ontario’s workplaces are becoming safer. Over the last 10 years, 11 per cent more of Ontario’s workforce was covered by the WSIB, and over that same period the number of claims for injury or illness decreased by 31 per cent.

The WSIB’s return-to-work team made more than 25,000 visits to businesses to help develop plans for healthy and safe return to work — a 20 per cent increase over last year. As well, the amount of plans that resulted in a successful return to work has steadily increased from 61 per cent in 2012 to 84 per cent in 2016, said the WSIB.

The WSIB, with JLT Canada and the Public Services Health and Safety Administration, held a discussion panel to explain the changes to the rate-setting framework.