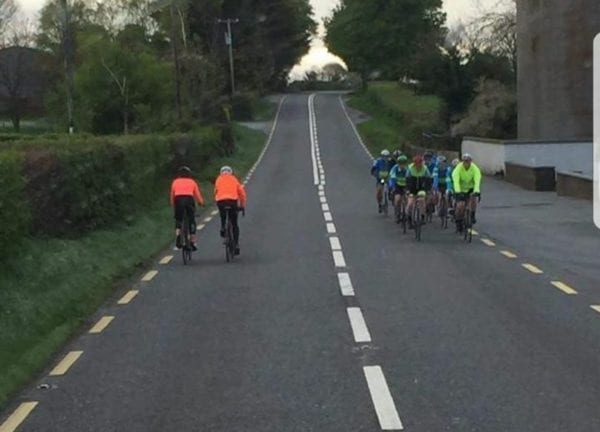 If you think helmets and hi-vis should be at the centre of the road safety debate in Ireland, consider this photo.

A Garda union a while back adopted as its official policy to push for making helmets and hi-vis clothing compulsory for cyclists.

If the proposal by the Association of Garda Sergeants and Inspectors was ever successful, it would be against the law for cyclists not to use the kit.

Most cyclists, including us folks at stickybottle, would agree wearing a helmet is a wise move. The Government agrees.

But, like stickybottle, while it encourages cyclists to wear helmets, it feels making them compulsory would result in a reduction in cycling.

We had a lot of interesting comment on the site when we covered the issue.

At stickybottle we outlined our opposition to the proposal in this piece: Why Garda hi-vis and helmets plan for cyclists is truly worrying

Not everyone agreed with us, though many cyclists did.

We felt the roads could be made safer for cyclists by the more thorough enforcement of existing legislation for all road users.

The mindset of some drivers – we stress, some – is reflected in a post in recent days on an Irish motoring forum.

The photo above shows two cyclists on one side of the road and a group on the other.

The caption with it reads: “They won’t move in for no one on the N24.”

All of the riders are wearing helmets and either hi-vis or bright clothing.

They are riding two-abreast and everything looks safe.

However, the driver of the vehicle from which the photo was taken clearly hasn’t a clue what safe cycling even looks like.

We’d suggest a public cycle awareness campaign, perhaps if the 1.5 metre safe passing distance was ever implemented, as a much better way of increasing road safety than compulsory helmets and hi-vis.

Educating all road users, including cyclists, about what safe cycling looks like would improve cycle safety.

It might also take much of the tension away that sometimes creeps into the cyclist-motorist debate.

It also suggests cycling is a really dangerous activity – akin to working on a building site – for which protective gear must be worn by all.

And as this example shows, no matter how much safety gear you wear, it will make no difference to the attitudes of some drivers.