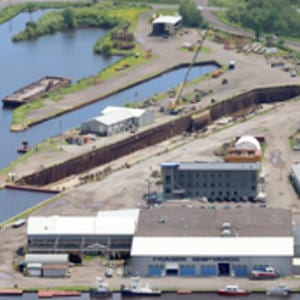 “He was always optimistic,” said Burch’s sister-in-law Stacy Mackie. “He would talk about going back to work.”

The reunion between the welder and the tools of his trade never happened as Burch, 53, died in April — two months after the incident aboard the docked freighter Roger Blough.

Burch succumbed to sepsis, Mackie said, which had been the result of infections to the burn wounds on his legs.

A Superior resident, Burch was a single man who doted on his nieces and loved to camp. But after the incident, he never left Essentia Health’s burn unit at the Miller-Dwan Building — except to spend his last days at Solvay Hospice House.

The incident led to the second federal fine levied against Burch’s employer, the Superior-based Fraser Shipyards, within the past year.

A 127-year-old shipping industry mainstay in Howard’s Bay and one of a roster of companies belonging to the Duluth-based holding company Capstan Corp., Fraser is a stranger neither to the work it performs, nor to scrambling to provide a safe workplace in which to perform it.

Documents obtained by Forum News Service using a Freedom of Information Act request reveal that the company has been inspected by the Occupational Safety and Health Administration 30 times since 1972, with 19 of the inspections resulting in citations.

The company’s track record of playing catch-up in the safety arena was on display again in the Burch case. Only after Burch was burned did the company begin to provide fire-retardant clothing and require workers wear it while performing the “hot work” involved in welding and the use of cutting torches.

“The reason for his death could have been prevented by something simple,” Mackie said. “If they were just too worried about the money, that’s irresponsible to say the least.”

While operational year-round, the shipyard is particularly busy in the winter, during the shipping offseason, when a couple hundred workers or more can be employed to conduct the maintenance and repair of Great Lakes freighters in layup.

During that time, it is a vital workplace for welders, riggers and other tradespeople who appreciate the winter paycheck and the respite from factory and refinery work that marks their other seasons.

Despite the recent violations, Fraser remains in the eyes of its employees an important option.

“We understand they’ve made some mistakes,” said Mark Garrett, the Kansas City-based director of health and safety services for the International Brotherhood of Boilermakers, the union that represents a large swath of the shipyard’s workers. “We’re going to make sure they’re held responsible, but it wasn’t going to be something like a nail in the coffin for the shipyard. It’s an important industry for our members.”

After initially agreeing to an interview for this story, Fraser officials ultimately declined to answer questions. In canceling a scheduled News Tribune interview with Fraser officials, spokesman Rob Karwath cited the advice of attorneys due to an ongoing civil lawsuit stemming from scores of workers at Fraser being exposed to toxic lead in 2016.

Instead, James Farkas, president and chief operating officer, issued a full-page statement extolling the company’s attention to safety which said, in part, “We have developed a strong safety culture,” while repeatedly citing the “unique” and “special safety challenges” presented by shipyard work.

But it was a Farkas quote during the OSHA investigation into Burch’s injuries and subsequent death that revealed the apparent fault at the heart of the company’s poor safety record — that despite performing its unique brand of tasks for more than a century, Fraser’s approach to workplace safety is inherently reactive.

“When something happens you ask how can we prevent — what else can we do?” Farkas told the investigator.

OSHA issued a strongly-worded news release in August 2016, in the wake of the lead exposure investigation, in which Dr. David Michaels, assistant secretary of labor for the agency, claimed that in that case Fraser had “accepted a contract with a very low profit margin and penalties for delayed completion, but could not meet the schedule without endangering its workers. This employer was unwilling to pay the necessary costs to protect employees from lead exposure.”

Farkas, in a responding news release, disputed those claims.

“We take the health and safety of our people and our community seriously. We acted to protect our people as soon as we learned of the problems. … We strongly disagree with OSHA’s statement that any of the issues were caused or worsened by business or profit motivations.”

When Burch was burned on Feb. 7, he’d been engaged in a practice called “washing welds.” He was using an oxygen-acetylene torch to clean off old welds from a cargo hold on the Roger Blough, so that rusting sheets of steel could be replaced with new ones.

The OSHA documents said that in addition to being underprotected from molten metal, sparks and flames, Burch was wearing a jacket and cold-weather coveralls that were “allowed to have holes and frayed fabric.”

In justifying its penalties against Fraser, OSHA said in its summary that “severe thermal burns are most likely to occur when protective clothing is compromised and employees are engaged in hot work.”

At 11 a.m., Burch reached down to wash welds at foot-level, the OSHA summary said, “when flames traveled up the victim’s insulated coveralls to the chest.” Co-workers rushed to help Burch out of the coveralls and put out the fire. He suffered severe burns to both thighs that for the following months would cause him excruciating pain whenever the dressings were changed, Mackie said.

During interviews with Fraser management, OSHA learned that employees wore their own gear — none of it required by the company to be fire retardant — and that “the injured employee’s coveralls … were bad with holes all over.”

One Fraser manager, whose name was redacted in the summary, seemed to blame Burch when the manager filed a company incident report that said, “This incident could have been prevented if the employee would not have been performing hot work while wearing frayed coveralls.”

Fraser’s environmental health and safety manager, Clyde Gruebele, told the investigator, “Holes in clothing is (the) nature of the business.”

In addition to the issue of protective clothing, OSHA also explored the practice of weld-washing, and learned “the employees performing washing each utilized a different technique.” Some “washed the welds individually while standing on the other side of the rib,” the summary said. Others, such as Burch, “stood on the same side as the welds and washed them in one vertical motion from top to bottom” — a practice OSHA said placed workers closer to the hot work.

In OSHA’s follow-up interviews, company officials appeared to learn their lesson from the Burch incident. The OSHA summary said Fraser adopted a weld-washing practice “to operate (a) torch in a manner to direct any molten material away from the body.”

Additionally, Farkas told OSHA, “We think (fire retardant) clothing is the right thing to do.”

In order for a company to fall on OSHA’s inspection radar, something has to trigger a response — a complaint, a fatality, a worker hospitalization.

“So you can see by those priorities that there could be several facilities that are not inspected by OSHA, because they have met no criteria to cause an inspection to happen,” said U.S. Department of Labor spokeswoman Rhonda Burke in an email to the News Tribune.

Simply put, there are too many worksites out there to require inspection of all workplaces. Conversely, Fraser — with multiple incidents across several years — has found it difficult to remove itself from the OSHA spotlight.

The mass exposure of workers to toxic levels of lead in 2016 initially elicited a nearly $ 1.4 million penalty — one of the largest fines assessed in the country in the past two years, according to a state-by-state review of penalties outlined on the U.S. Department of Labor website.

In that case, workers had been crawling all over the freighter Herbert C. Jackson in order to change out its steam engine for twin diesels. It was a landmark job — the first repowering at the shipyard since the 1980s. The company was eager and justifiably proud to tell about it, inviting the News Tribune aboard the ship for what would become a feature story and video in February 2016. Just weeks later, the job was abruptly halted after workers began to fall ill and the company’s lead-abatement practices scrutinized. Wisconsin Public Radio later reported that 171 of 233 workers on the site had tested positive for lead exposure.

“When I first went into the facility, it was not good,” Garrett said. “They were into something bigger than they really understood.”

According to OSHA documents and a Fraser news release, only after the job was up and running again did it include the protective suits, breathing equipment, air monitoring, air scrubbers, decontamination and changing trailers and cleaning supplies required for safe lead abatement.

Fraser later agreed to pay OSHA $ 700,000 as part of a settlement agreement that included the development of a new safety plan in exchange for not having to admit fault or liability. In an August 2016 news release, company officials described the new safety plan as one that included “protections for how employees, laborers and contractors prepare for work, conduct work and clean up after work.”

Fraser has already settled with OSHA and paid a $ 7,530 fine in the Burch case, which is officially closed. But the lead-exposure case lingers, subjecting the company to three years of additional OSHA oversight, including the possibility of random safety audits. A civil trial in the lead-exposure case between one of the workers and Fraser is also scheduled for February 2018.

Mackie said she didn’t want to comment on the possibility of civil action by the Burch family against Fraser, and no complaint has been filed.

Meanwhile, Garrett said he has no compunction about sending his workers Fraser’s way. He explained that while he engages Fraser with “a watchful eye,” he also appreciates the shipyard’s willingness to bring in outside experts to help advance its safety practices, like it did when it brought him to Superior in 2016 during the lead-exposure incident. Not all companies would do that, he said.

“As far as I know, they’ve got a lot of work coming up,” Garrett said. “We work together, and we want them to stay in business. We also want to protect our members.”

Fraser’s current family ownership group has been in place since 1976, Farkas said in his written statement to the News Tribune, meaning it has been responsible for the company’s seemingly reactive posture to 30-plus years of safety issues.

“I hate to say it,” Garrett said, “but that’s probably the majority of employers in the U.S. All old OSHA regulations have been written based on reaction.”

Midway through its summary on the Burch case, an OSHA investigator described a follow-up visit to the worksite. By that time the company had already reacted to the Burch incident by providing fire-retardant coveralls to its workers.

“One employee was viewed wearing the now-provided and required green fire retardant coveralls,” the investigator wrote. “There was a tear in the backside.”