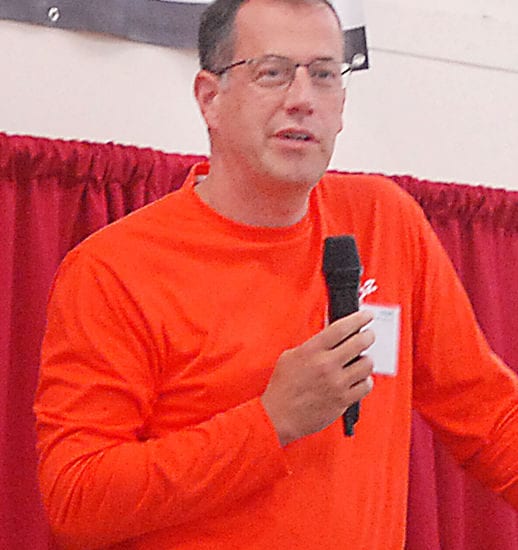 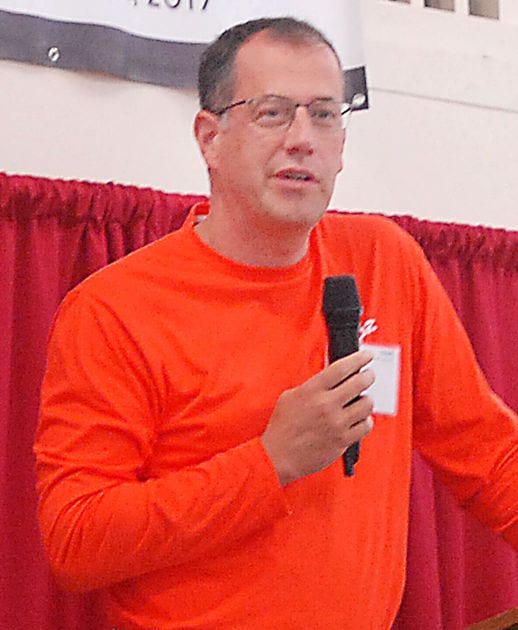 “The safe way is the Sapa way.”

That slogan, made by Yankton Sapa employee Joe Loecker, fit into the theme of this year’s Sapa Health & Safety Day.

The event, held at the NFAA Easton Yankton Archery Center Thursday, focused on the subject of safety in the workplace. Speaker and Sapa Extrusions North America vice president/general manager Mike Stier discussed the importance of workplace safety and how the company’s safety performance problems have been an issue is the last couple years.

However, he is confident the company is moving in a better direction.

“Who is authorized to stop production?” he asked the room full of Sapa employees. “Who believes all injuries are preventable?”

Nearly all hands in the room raised to answer both of those questions.

One of the best ways to put safety first is by having personal accountability, Stier said.

To demonstrate this, he shared personal experiences of when he didn’t demonstrate caution. The first was when he was cutting palm fronds at his home in Phoenix, where his lack of protective eyewear led to him cutting his cornea on a frond.

Another injury occurred shortly thereafter, when he was helping his wife and daughter trim hydrangea bushes. His opting out of wearing leather gloves led to him almost cutting the end of his finger off.

Each injury had the potential to deprive him of his hobbies of piloting and guitar playing.

“A little bit of humility goes into that,” he said of his two mistakes in two weeks.

He advised the Sapa employees in attendance to not have the “it happens to somebody else” attitude.

“It can happen at any time if you take your eye off the ball,” he said. “Take it to heart on how that can affect you.”

“Step back and reflect on your knowing of where the dangers are and what you’re dealing with every day,” he said. “Don’t get caught up in the paperwork and (don’t) focus on just going over the list. Think about: What are those risks? What are you afraid of? What are you taking for granted every day where you could be hurt?”

He cautioned employees to keep their guard up.

“We’re trained that the more circumstances that stack up against you, the chances of something going wrong increase,” he said. “So if you’re working on (a machine) and hear something that’s not right, or are using a hammer that’s rounded off on the edges. … And if (this happens) late at night and you’re feeling frustrated, this is when it’s highly likely that something can happen. So if something’s wrong, fix it, or stop and leave.”

While the company is still far away from getting to point of no injuries happening at the work site, Stier believes it could happen someday.

“With the right behavior, attitude and culture that goes into the framework of (the job), it is probable that you can get to zero,” he said. “Not possible — possible sounds like a far-reaching thing. The right mindset drives that to probable.”

He congratulated the Yankton Sapa for its improvement in operations in the last year.

The event also provided Sapa employees with opportunities to donate blood and undergo wellness checks while playing games and visiting with each other.