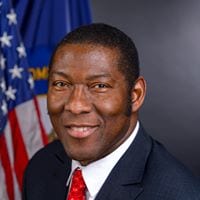 “I want to congratulate Sargent and Greenleaf on their fifth Governor’s Safety and Health Award,” said Labor Cabinet Secretary Derrick Ramsey. “Working more than 800,000 consecutive hours without a serious injury illustrates their commitment to safety in the workplace. On behalf of Governor Bevin and the Labor Cabinet, it is my honor to bestow this award to these hard working men and women here in Nicholasville.”

Founded in 1865, Sargent and Greenleaf is a manufacturer of medium and high security locks and locking systems. Founder James Sargent invented the “Magnetic Bank Lock,” the first key-changeable combination lock that gained near immediate acceptance from safe manufacturers, and in 1960, the U.S. Treasury adopted Sargent’s Magnetic Bank Lock as its standard.

Today, the Nicholasville facility is the company’s global headquarters, housing 113 employees and is identified as a Top Secret security clearance facility from the Department of Defense.

“From everyone here at Sargent and Greenleaf (S&G), thank you for this honor,” said COO Brain Leary. “We are proud and delighted to say this is our fifth Governor’s Safety and Health Award. S&G employees are dedicated to making safety first. Safety and security go hand-in-hand, and this is an impressive example of why the world relies on S&G for security.”

This award marks the fifth time that the Nicholasville facility has received the Governor’s Health and Safety Award – also earning it in 2010, 2013, 2015 and 2016. According to safety coordinator Stephanie Potts, employees engage in monthly safety meetings to review proper protocols. Employees are also encouraged to participate in a safety incentive program that helps to reward those who demonstrate an exceptional workplace safety track record.

“We are always proud to see one of our local companies put such an emphasis on the health and safety of its employees,” Buford said. “I commend Sargent and Greenleaf for their commitment to a thriving workplace environment, and I appreciate the Labor Cabinet and Governor Matt Bevin for giving this recognition to a valued business in Jessamine County.”

According to a recent report from the U.S. Bureau of Labor Statistics (BLS), in 2015 Kentucky employers reported the lowest incident rate for nonfatal occupational injuries and illnesses in the state’s history.

Based on a mathematical calculation that describes the number of recordable incidents per 100 full-time employees, Kentucky’s rate improved from 3.8 in 2014 to 3.7 in 2015 – reflecting the most recent data available. This rate has steadily declined since it was first calculated in 1996, when a rate of 8.4 was reported.

For more information on the Governor’s Safety and Health Award, click here.