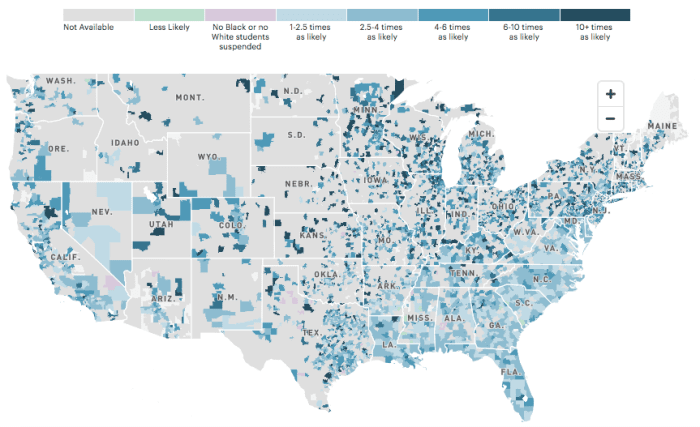 Written by Peter Piazza, a post-doctoral researcher at the Center for Education and Civil Rights, and originally posted at the  Diversity Notebook.

This is obviously a busy time of year, so I wanted to do a quick post with one major major recent story – In case you missed it or have been too busy to read about it, this awful administration continued its effort to rollback of civil rights protections for K-12 students (children!) in its reversal of Obama-era guidance on school discipline. Specifically, the “school safety” commission convened after the Parkland shooting issued a report calling for a repeal of the Obama Administration’s 2014 guidance on school discipline. The report – signed by Betsy DeVos, Kirstjen Nielson and Matthew Whitaker – was released earlier this week (full text here).

Before talking about the guidance, I want to go to this map from ProPublica’s Miseducation website. I have just a screenshot here, but if you follow the link you can get to the interactive version. Under “measure” you can select “discipline” and then you can see a nationwide map of school districts where Black students are more likely to be suspended than White students. If you have a few minutes, try to find one district where this is “less likely.” (The #s will pop up when you hover over each district.) I’ve spent a decent amount of time with this, and I still haven’t found one district. In the entire country. As I’ve written previously, research points clearly to the harmful and racially disproportionate effects of unconscious bias and exclusionary discipline, and this has real consequences for students, their families and all of us, really.

Nonetheless, this new guidance “[gets] rid of Obama administration guidance aimed at making sure students of color and students with disabilities aren’t disciplined more harshly than their peers,” as written in this Ed Week summary. A few quick points:

Because this blog focuses on race and civil rights, I haven’t discussed the report’s recommendations re gun violence in schools. But, that part is also quite upsetting. Here are just a few key points from an additional Ed Week summary:

The New York Times also has a great story about how the report plays down the role of guns in its decision to instead focus on discipline. And, there’s a very strange connection between the two topics. Specifically, the report justifies its proposed repeal of the Obama guidance by essentially saying that its approach to discipline was too soft. Again, this entire report was commissioned in response to Parkland. So, the implication is that the Obama guidance had something to do with the Parkland shooting and/or repealing it will somehow prevent more school shootings.

Before committing the Parkland massacre, Nikolas Cruz was referred to an alternative discipline program for nonviolent offenses, called the PROMISE program. The report argues that “some alternative discipline policies encouraged by the [Obama] Guidance contributed to incidents of school violence,” as part of its justification for repealing the prior guidance. However, pointed out acrossseveral articles:

So, it’s a completely invented connection that uses a national tragedy to justify removing civil rights protections for Black and Latinx students. Further, it leans heavily on harmful stereotypes by strongly implying that disproportionate discipline is necessary to keep schools safe. To be clear, the Obama guidance hasn’t officially been repealed yet, but this report is a very strong indication that will happen soon.

I am reluctant to end my 2018 posts on this note, but I also wanted to make sure this story didn’t get lost in the busyness of this time of year, as the administration likely intended.

I do want to say that I appreciate your readership so much, especially with so much happening in the school diversity world and beyond. In 2019 news roundups, I’ll track updates on major stories – like the Affirmative Action case against Harvard, the lawsuit against Hartford’s magnet school program, and another lawsuit (but a potentially promising one) in New Jersey – and whatever develops out of this administration and this very difficult political climate. I’m also working on a research roundup about school choice and I’m planning posts on a few new topics – a school district secession attempt in PA that hasn’t gotten much attention, white male positionality in school diversity work, successful voluntary integration efforts (and more!). If you have ideas for posts, feel free to use comments or to reach out via email (psu.cecr@gmail.com). In the meantime, hope you have a great/fun/restful holiday season and new year!