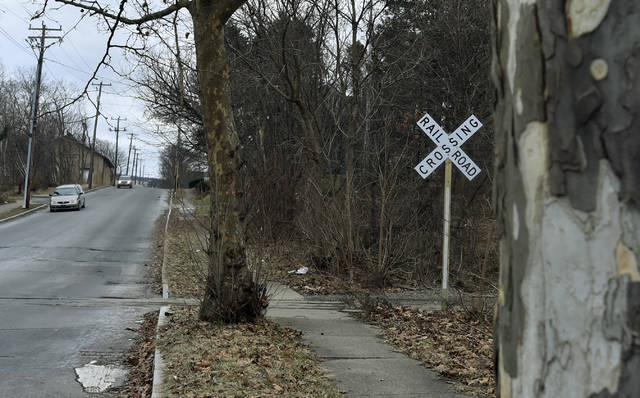 Wilkes-Barre prepares to cut down this tree on Parrish Street so the rail crossing sign can be moved closer to the roadway– a state recommendation to increase safety, authorities said.-Aimee Dilger|Times Leader

Safety enhancements will be made at eight street-level railway crossings in downtown Wilkes-Barre, according to regional authorities.

The majority of the changes originate from a Jan. 9 Pennsylvania Utility Commission (PUC) and state Department of Transportation examination of the crossings that included agents of Wilkes-Barre and the Luzerne County Redevelopment Authority, which owns the track.

Authority administrative assistant/program manager Margaret Thomas informed the authority board on the review at last week’s meeting and stated later on that the inspection originated from an October Times Leader story and video about a vehicle driver who narrowly got away getting hit by an approaching train on East Market Street.

Thomas supplied this summary on safety plans for the following crossings:

Due to faster-traveling automobiles in this location, flashing yellow lights will be connected to brand-new yield indications to draw more attention to the crossing.

Drivers are needed to yield at all crossings to ensure it’s safe to cross. To reinforce this mandate, the Federal Railroad Administration is needing the addition of yield signs at all crossings that depend on crossbuck signs this year, authorities have actually stated. Some state or federal funding should be offered to help cover this expense, officials stated.

Two crossbuck indications need to be moved closer to the roadway because they are not visible enough, the PUC identified.

The indications were set back because of trees that Wilkes-Bare has concurred it will reduce, said Jim Raffa, sales and marketing vice president at Luzerne Susquehanna Railway, the business that maintains and operates trains on the authority’s line.

Wilkes-Barre City Operations Director Butch Frati said the trees will be eliminated as quickly as possible.

PUC was concerned a landscaping bush at the corner of the Best Western Plus Genetti Hotel & & Conference Center parking lot might be blocking the view of an approaching train. Thomas said she sent a letter to hotelier Gus Genetti asking for the bush be cut to about 3 feet high.

“We will enjoy to adhere to the request to increase the safety of residents,” Genetti told a reporter.

Pavement markings and signs were missing and must be changed by the city.

Frati stated the city already prepared to include brand-new pavement markings at all eight crossings after the city evaluated the places following the media report last fall. The marking will be completed this spring, he stated.

Rather of paint, the city will depend on an outdoors specialist to apply heated plastic markings to the highway, he said. This strategy lasts longer– approximately a decade– and has a more reflective surface, he said.

Indications will be included where needed and can be made by the city in-house, Frati stated.

“We will get on these as quickly as we can,” he stated.

In addition to pavement marking, a recently set up crossbuck sign has been overturned and need to be replaced.

No concerns were identified at the Conyngham Opportunity and East Northampton Street crossings, Thomas stated. Nevertheless, Frati worried the pavement marking will be dealt with at all city crossings.

Thomas stated the state will perform another evaluation to confirm execution of all advised changes.

“When concerns are raised about security conditions in a particular area, we work to promptly follow up with railways and other stakeholders,” Hagen-Frederiksen stated.

Wilkes-Barre plans to reduce this tree on Parrish Street so the rail crossing sign can be moved better to the highway– a state recommendation to increase safety, authorities stated.