Seven workplace deaths in a fortnight 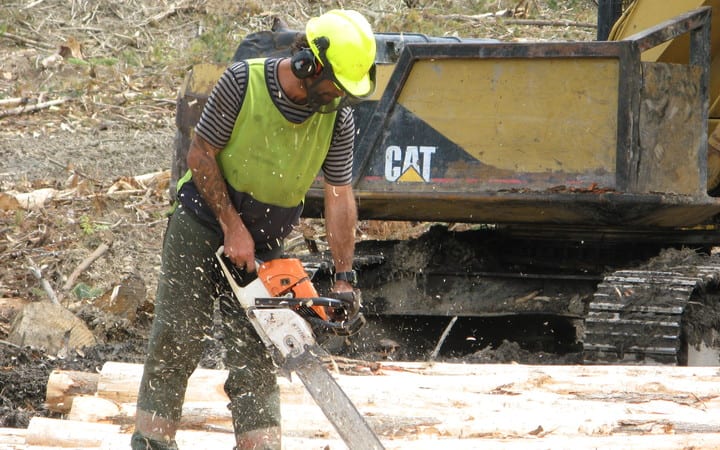 Seven people have died in workplace accidents in the past fortnight, and Worksafe says a culture change is needed.

Of the seven deaths in the last fortnight, there were three in forestry, two in farming and two in construction. (File photo) Photo: RNZ/Susan Murray

There were just 10 fatalities in the first three months of the year – but an average of about one a week for the past few years.

Worksafe chief executive Nicole Rosie said the upward trend was “really concerning”, and some families were now without a father, son or mother.

She said the deaths occurred in traditionally high risk sectors: three in forestry, two in farming and two in construction.

“The theme is that not everything you do on a day-to-day basis can kill you, but there are some activities that have significant higher risk.

“What we are seeing is that those activities continue to be the major cause of workplace fatalities in New Zealand,” she said.

“Two of these deaths are related to tree felling, so traditionally a very high-risk activity. One is related to working with farm animals and another a quad bike.”

One of the construction-related deaths involved a moving vehicle, while the other happened when a man was piling a house that moved and killed him, Ms Rosie said.

She said New Zealand had been doing well, with the number of deaths going down over the past few years.

The government introduced new health and safety laws one year ago, in response to the Pike River mining tragedy in 2010.

The rules required businesses to identify work-related risks and do what was “reasonably practicable” to eliminate or manage them.

They also introduced a $ 600,000 fine for people held responsible for workplace accidents.

Ms Rosie said despite the law change, more needed to be done.

“There has been dramatic downward trend in forestry, and that has been led by the sector itself, which has tremendous leadership in attempting to improve its health and safety record,” she said.

“That said, the industry is a high risk industry and people are involved in high risk activity in a day-to-day basis. So it’s one of these things that you can’t just put a focus on for a short period of time. It’s got to be ongoing.”

Every workplace and business owner needed to be committed to improving their health and safety, she said.

“Yes, as a regulator we have new tools, but ultimately, it does require a culture change and that has to be led by individual businesses and every individual wanting to be safer,” said Ms Rosie.