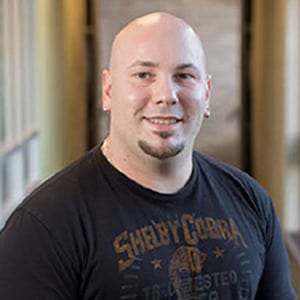 Workplace injury survivor cautions students at AESS to be careful on the job.

Michael Lovett has been speaking to audiences across the Fraser Valley to get the message across that workplace safety is a must, especially for young workers. He spoke to students at Agassiz Elementary Secondary School on Monday to do just that.

Michael was 18-years-old when he landed a job at a sawmill in Mission, B.C. Excited to be earning a wage that would allow him to save enough money to buy his first car, he was eager to demonstrate his strong work ethic to his co-workers and managers. He started sorting lumber on the green chain, then moved to the clean-up crew on the graveyard shift.

“It was a big, intimidating mill, and I wasn’t supervised,” he says. “I was trained by a guy my age on how to clean the conveyer, but really I was kind of thrown into the job. I was told to clean the conveyer while it was running, so it would take less time. I didn’t think about the possibility of getting hurt. I just wanted to get the job done.”

While working the graveyard shift just a few months after starting the job, Michael suffered a serious injury that cost him his leg – and nearly his life.

As he was cleaning a running conveyor, Michael’s boot became stuck in the conveyor’s roll feeder and it started dragging his body into the moving machinery.

“I was very scared,” Michael says, “thinking I’d have to watch myself die and that I’d still be alive when the roller finally went over my head.”

By pure chance, a link broke off the engine’s drive chain and shut the machine down just seconds before it would have encompassed his body. Michael survived the incident but he lost his left leg. After undergoing several surgeries and extensive physiotherapy, he learned to walk on a prosthetic leg.

Now, every morning, Michael puts a liner over his stump, then dons his prosthesis. He can’t walk very long without needing a rest, and still experiences pain.

“It’s something I have to live with,” he says. “I was a wrestler and played soccer. I used to be very active, and a lot of that’s been taken from me.”

Michael’s loss has given him an avenue to create awareness around workplace rights and safety and has provided him the unique opportunity to share his story at schools and workplaces throughout B.C. and across Canada. Michael has been sharing his story publicly for the past 13 years through WorkSafeBC, an agency that continues to focus prevention efforts on young workers, concentrating on industries that pose the highest risk to youth, partnering with employer associations, organized labour, government, parents, community groups, and employment centres to increase awareness of young worker health and safety issues.

Michael’s message was clear to students and that is that young workers should take workplace health and safety seriously and understand their right to refuse unsafe work.

“Work isn’t like school,” he says. “Nobody’s watching out for you like your teachers did. Be careful about putting your life into someone else’s hands. Legs don’t grow back.”