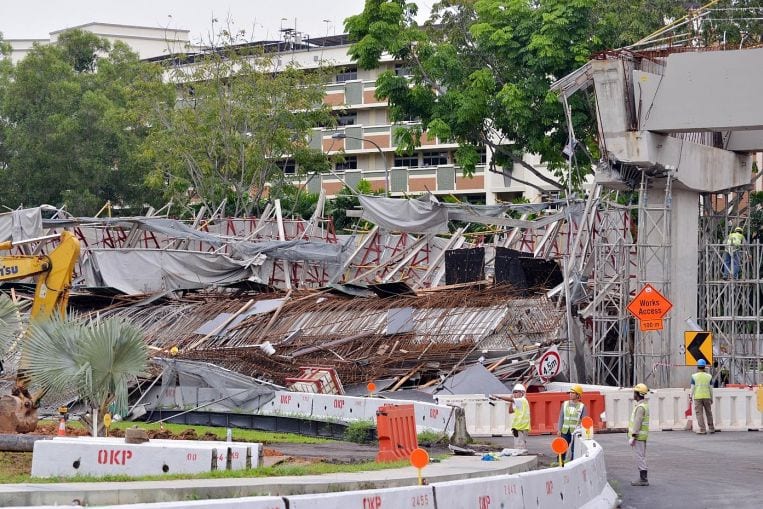 The number of near-miss incidents reported to the Land Transport Authority (LTA) by its contractors soared from 73 in 2015 to 3,126 last year.

But in the same period, there was also a 16 per cent drop in the number of work-related accidents – which were reportable to the Ministry of Manpower – at LTA’s project sites.

Announcing these numbers yesterday, LTA chairman Alan Chan said that the results are “encouraging” and “reflects that effective near-miss reporting will positively bring about a safer workplace”.

He was speaking at the LTA’s 19th Annual Safety Award Convention, which was held at the Singapore Polytechnic Convention Centre. A total of 23 contractors were honoured for their exemplary workplace safety and health practices.

The LTA said that since November 2015, it has taken a deliberate approach to engage its contractors to report near-misses.

Near-misses are categorised as incidents which could have resulted in worker injury, or damage to property and the environment. They can arise from unsafe behaviour, such as walking under a suspended load.

Asked about the surge in near-misses reported, an LTA spokesman said: “As LTA instils a no-blame culture on sites, contractors have been coming forward to report their near-misses and to learn from them.”

He added: “Through near-miss reporting, LTA and our contractors have been able to identify lapses, and close the gaps in safety management.”

Up to August this year, a total of 2,966 cases of near-misses have been reported.

For contractors such as Shanghai Tunnel Engineering (Singapore) – which was presented with the LTA’s top safety award yesterday – reporting near-misses is essential.

Managing director Khor Eng Leong said it has helped the company maintain a zero reportable-accident record at its worksite in Shenton Way, where it is constructing an MRT station and train tunnels.

A total of 145 near-misses have been reported since work started in 2014. Workers can report near-misses via a WhatsApp chat group and are incentivised with supermarket vouchers of $ 30 for doing so, said Mr Khor.

“A near-miss is a potential accident. When it happens, we will intervene immediately and get the site supervisor to stop the work and retrain or counsel the worker involved,” added Mr Khor, who is also project director for the Shenton Way MRT station project.

Daewoo Engineering & Construction’s Mr Lee Soo Kil, who is project director for the Thomson-East Coast Line’s Stevens station and tunnels, said that every month, an average of 30 to 40 near-misses were reported to the LTA last year.

Mr Lee said one near-miss involved working at height, when barriers were not installed on an elevated platform, which could have resulted in a worker falling off.

Mr Chong Kee Sen, former president of the Institute of Engineers, Singapore, said it was a “positive sign” that LTA’s contractors are paying attention to and learning from near-misses.

Mr Chong added: “If near-misses are not highlighted, people will tend to think that it is okay to continue with the same way of doing things. Near-misses are good early warning signs.”

Yesterday, Mr Chan also touched briefly on the fatal collapse of an uncompleted Pan-Island Expressway viaduct in July, which killed one worker and injured 10 others.

Mr Chan said it is a “painful reminder that accidents do happen and safety must be taken seriously by all”. The incident emphasised that beyond practising worksite safety, it is imperative that safety is foremost in the minds of all involved, he added.