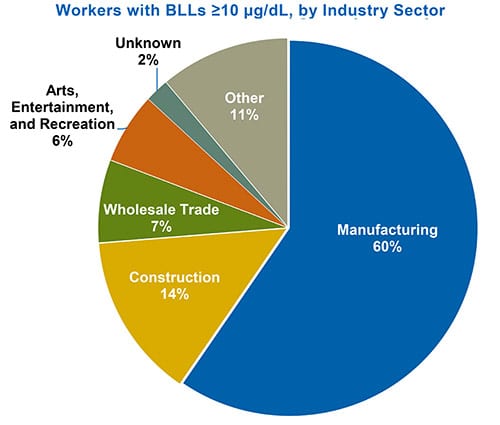 Oakland, CA – More than 6,000 workers in California have elevated levels of lead in their blood, according to a report from the state’s Department of Public Health.

Lead exposure can cause permanent bodily damage and has been linked to hypertension, kidney disease and cognitive dysfunction, among other health effects.

For the study, researchers used data from CDPH’s Occupational Blood Lead Registry from 2012 to 2014 to identify workers at risk. A total of 38,440 workers in the state had taken a blood lead level test during that time span, and 6,051 of those workers had elevated levels, which were defined as anything at or above 5 micrograms of lead per deciliter of blood.

Other findings from the report:

“Based on the findings of this report, the [Occupational Lead Poisoning Prevention Program] initiated new prevention activities to protect workers and to increase BLL testing,” the report states. “With increased BLL testing, and therefore a more complete picture of workplace lead exposure in California, OLPPP can better target prevention efforts to industries and employers that most need them.”