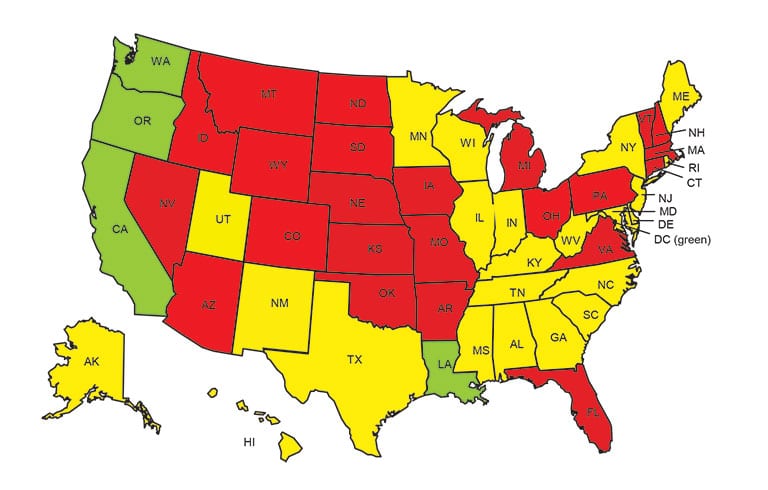 Washington – Five states and the District of Columbia earned top scores in the 2017 Roadmap of State Highway Safety Laws from the group Advocates for Highway and Auto Safety.

The roadmap is an annual report that rates all 50 states and the District of Columbia on the adoption of 15 traffic safety laws.

The states that scored highest are Delaware, Louisiana, Oregon, Rhode Island, Washington and the District of Columbia. However, 17 states earned the lowest rating based on Advocates’ analysis. Underperforming states include Arizona, Florida, Iowa, Missouri, Ohio, Nebraska, Pennsylvania and Virginia.

Other findings from the report:

According to the National Highway Traffic Safety Administration, more than 35,000 people were killed and more than 2.4 million were injured in crashes in 2015 (the most recent year for which data is available). Traffic fatalities increased by 7.2 percent from one year earlier – the largest percentage increase in nearly 50 years.

“The problem is clear – too many lives are lost, serious injuries sustained and needless costs incurred due to motor vehicle crashes,” Jackie Gillan, president of AHAS, said in a press release. “And so is the solution. Today, every state has dangerous gaps and loopholes in their traffic safety laws that needlessly make our roads dangerous and put families at risk. The report’s title, ‘Have We Forgotten What Saves Lives?’ raises a pressing question. And, unfortunately, the answer is ‘yes.’ This public health crisis demands legislative action and not legislative amnesia about what works and what is needed.”