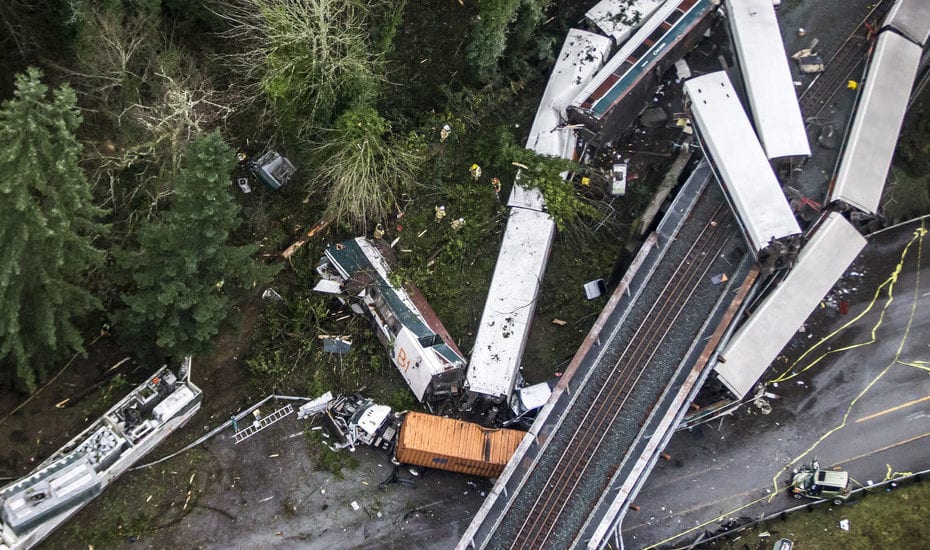 The train control systems that help to avoid derailments have been implemented across all passenger rail lines following the deadly crash a year ago in Tacoma, Wash., the state’s Department of Transportation said.

by Alex Bruell, The Daily News


Emergency crews respond after an Amtrak train derailed and fell off of a bridge and onto Interstate 5 near Mounts Road between Lakewood and Olympia, Wash., on December 18, 2017. Amtrak announced it will stop running trains on some U.S. tracks if they don’t have satellite-based train-control systems operating by the end of this year. (Bettina Hansen/Seattle Times/TNS)


(TNS) — Amtrak and state transportation officials say they’ve completed installation of a new train control system that could have prevented a fatal accident a year ago today near Tacoma.

“All of the passenger trains in the Pacific Northwest are currently operating under (PTC),” said Janet Matkin, communications manager at WSDOT Rail Division.

Amtrak PR manager Olivia Irvin confirmed that “100 percent” of the 432-mile U.S. section of the Amtrak Cascades route is now equipped and operating with positive train control, a technology that uses computers and satellites to stop errant or excessively moving trains.

Amtrak and BNSF Railway are now “working out minor glitches” between the servers they use to communicate with the trains, Matkin said.

Passenger service through the Point Defiance Bypass is still slated to return in the spring after a safety evaluation from the National Transportation Safety Board (NTSB), Irvin said. Prior to that, Amtrak will be re-qualifying all of its engineers and crews with three months of training.

PTC likely would have prevented the fatal accident last Dec. 17 on the newly inaugurated Point Defiance Bypass track just north of the Nisqually River. The derailment and ensuing crash killed three train passengers and injured 70 other people either in the train or in vehicles on Interstate 5 below.

No official cause of the wreck has been established, but reports indicate the southbound Amtrak Cascades train entered a sharp curve where the tracks overpass Interstate 5 at 78 mph, more than twice the 30 mph speed limit. The accident occurred on the first use of the $180 million bypass, and WSDOT and Amtrak have been criticized for inadequately training the engineers using the route. The train engineer said he knew he was approaching a sharp curve and had to slow down, but he missed a warning sign.

PTC is meant to safeguard against human error, and uses a combination of satellite, radio and computer technology to stop a train if it misses a signal or fails to slow down as required.

The NTSB is about two-thirds through investigating the wreck, according to a Dec. 13 update. It plans to deliver a final report in 2019.

In 2008, after a collision between a freight and commuter train in California killed 25 and injured 125 people, Congress required Class I railroad main lines handling dangerous materials or intercity passenger trains to fully implement PTC by Dec. 31, 2015. In late 2015, Congress extended the deadline by at least three years to Dec. 31, 2018.

A 2019 fiscal appropriations bill, passed in August, set aside $50 million for Amtrak to implement safety technology (including PTC) on state-supported routes like the Cascades, in addition to the $50 million set aside in 2018. A total of $505 million has been set aside for safety grants emphasizing PTC implementation in 2018 and 2019.