Trump Wants To Call His Shutdown A ‘Strike’|Crooks and Phonies 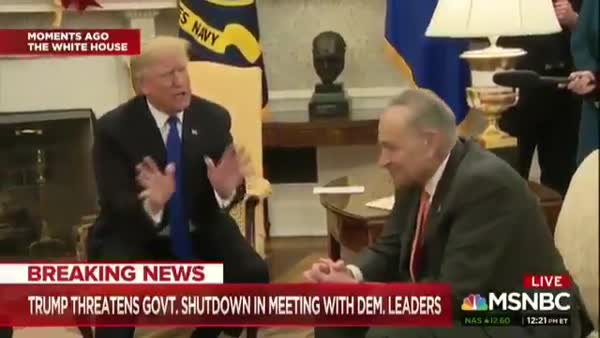 Trump, in his profanity-laden tirade from the other day, said that he didn’t like the word “shutdown:”

Mr. Trump opened Friday’s meeting with lawmakers with a 15-minute profanity-laced rant about impeachment, according to people familiar with the meeting. Mr. Trump also told lawmakers he didn’t like the word shutdown and preferred the word “strike,” one of the people said.

Trump, the self-proclaimed expert on everything, and who has the best words, obviously doesn’t have a clue what the word “strike” means.

For the old man’s edification, a strike is a voluntary direct action taken by employees to protest working conditions, whether it’s workplace safety, wages and benefits, and/or, bargaining in bad faith. Trump’s shutdown would be more properly termed a lockout, where the employer is telling the workers not to come in and to stop paying them. But even that term is too kind, since not only has Trump furloughed tens of thousands of federal employees, he’s making thousands more work without getting paid.

Despite Trump’s vain efforts to paint the federal employees as the bad guys, they are truly the victims in more ways than one.

Another way to describe Trump’s malfeasance is to call it a temper tantrum. Trump is acting like a spoiled two year old who is screaming, throwing himself on the floor and flailing his arms and legs around – all because poor little diddums was told “no.”

And all of this unnecessary drama is so Trump can throw red meat to his base by stirring up the racist/Nazi pot. And the reason for that is to distract from the failing economy and the ongoing investigations.

Change that previous analogy to a spoiled two year old having a tantrum because he got caught with his hand in the Russian cookie jar and is trying to avoid the inevitable consequences.

Perhaps the best way to cope with this hot mess is to also think of it as another nail in his political coffin. Possibly several nails as taxpayers and voters realize what this tantrum is costing them. This will undoubtedly be true when people start filing their taxes but not receiving their refunds.

Make no mistake about it though, whatever perspective you take, this shutdown is all Trump’s and Trump’s alone. He said so himself.