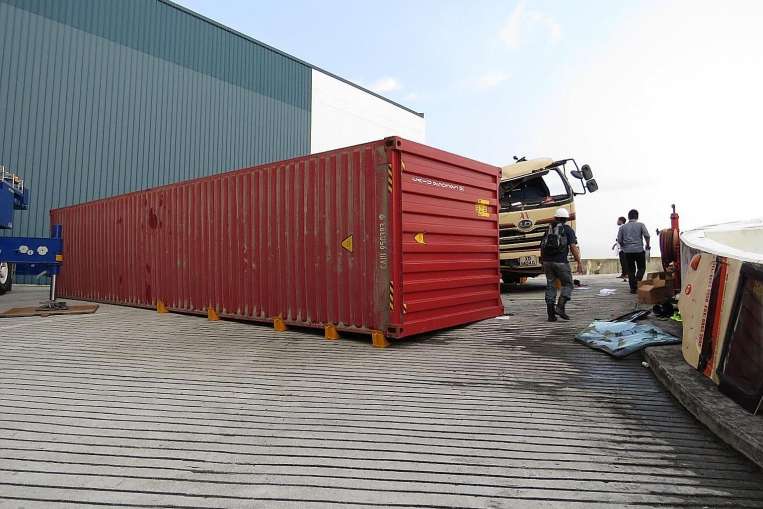 Two companies were fined for failing to take adequate safety measures under the Workplace Safety and Health Act.

Two prime-mover drivers – one from each company – died due to the companies’ lapses, said the Ministry of Manpower (MOM) in a statement yesterday.

Cummins Asia Pacific was fined $ 80,000 for failing to ensure that its worksite allowed prime movers to manoeuvre safely, and for improper implementation of a Workplace Traffic Management Plan.

On March 25, 2015, Mr Yu Hairui was driving his prime mover loaded with a 40ft container on its trailer on a ramp at CWT Logistics Hub 3 at 52, Tanjong Penjuru Road, when the container dislodged and toppled onto the vehicle’s cabin. He died from injuries on the same day.

MOM investigations revealed that the driveway was congested at the time, and that drivers had difficulty manoeuvring their vehicles and trailers.

And at least one of the four twist locks securing the container to the trailer was not fastened.

The other company, Woodlands Transport Service, was fined $ 130,000 for not repairing a prime mover despite its driver repeatedly raising the issue of a faulty handbrake.

On Oct 9, 2015, Mr Yeoh Lim Koon parked his prime mover with a 24-tonne trailer load at the designated parking area on a slope at Telok Blangah Street 31.

When he got out to disconnect the air hoses attached to the vehicle and trailer, the vehicle began to roll forward.

He tried to open the cabin door, but fell into a drain.

The tail end of the trailer caught him and dragged him out.

The vehicle stopped moving after mounting a kerb outside the worksite and Mr Yeoh was found under the rear of the trailer.

Investigations revealed that despite the faulty handbrake, Mr Yeoh was allowed to continue with deliveries using the vehicle.

And the company did not follow up on repair works and the fault was never repaired.

Investigations showed that the bracket used to stabilise the prime mover’s air tanks was also loose, causing aleak which could have resulted in the faulty handbrake.

MOM director of occupational safety and health inspectorate Chan Yew Kwong said: “These accidents could have been prevented if companies do not compromise the safety of their workers…

“There is no business cost that can account for a life lost and MOM will make sure companies understand this fully.”