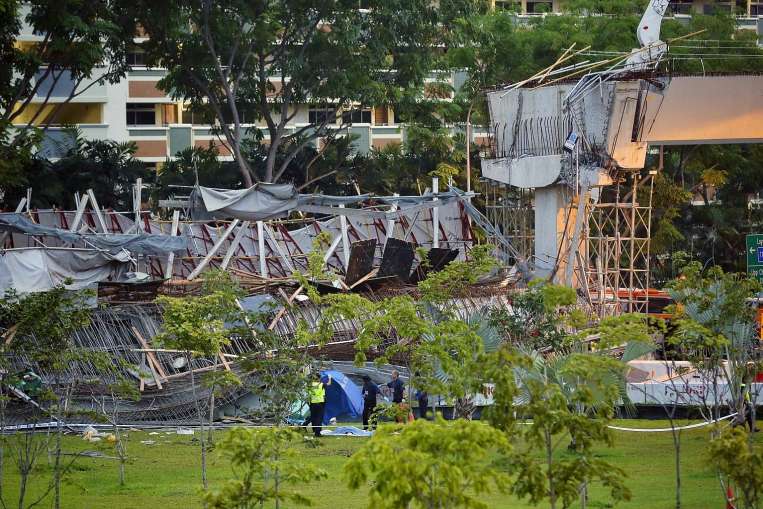 The family of the worker who died in the collapse of an uncompleted structure near the Pan-Island Expressway (PIE) last Friday will be receiving a “bereavement token” from his employer.

Tongda Construction and Engineering will also be paying for the next of kin of Mr Chen Yinchuan, 31, to travel from China to Singapore to pay their final respects and take his body home, according to a statement by the Migrant Workers’ Centre (MWC) last night.

“The employer has also made known his intention to provide the family with a bereavement token to tide them over the difficult period before the work injury compensation assessment can be made,” said MWC chairman Yeo Guat Kwang.

He also gave an update on the 10 workers who were injured.

Two are still in critical condition, with hospital staff working to treat their most urgent injuries and stabilise their conditions. The two are Chinese national Gao Liqun, 49, and Bangladeshi national Barek Mohammad Abdul, 25.

Two Bangladeshi workers – Mr Khan Mohammed Sohan, 23, and Mr Moniruzzaman Mohammad, 34 – have been moved to normal wards. Mr Yeo said: “Both were in positive spirits, were able to speak, and are optimistic about making full recoveries.”

Two others – Mr Alam Shah, 33, from Bangladesh, and Mr Kathiresan Alaguraja, 30, from India – had just completed follow-up operations and are recovering. The six are all at Changi General Hospital.

Mr Yeo said they were able to sit up and move around by themselves when MWC staff visited them. “While some head and body aches persist, the workers are hopeful that they may be cleared to go back to work soon.”

All necessary work injury claims will be filed by the employers.

In the statement, Mr Yeo alluded to challenges that the MWC faced in gaining access to the workers.

“It took us a few days to navigate various access controls before we finally managed to see all the workers involved,” he said, but added this did not cause a slowdown in providing workers with legal aid.

He said the delay may have been due to the high-profile nature of this accident, and the apprehension on the part of the main contractor – Or Kim Peow (OKP) Contractors – about involving “an unknown third party”. He said that “there is no reason to deliberately exclude the MWC as our only concern is for the well-being of the affected workers in such situations”.

In a response given to The Straits Times, an OKP spokesman said its top priority is the welfare of the injured workers, who are being cared for by the medical team, and visitors are subject to the patient visiting hours and rules stipulated by CGH. “This is particularly so for the two patients in ICU,” she said.

She added: “We welcome stakeholders to provide their feedback and work together with us as we strive to provide support and assistance for the affected workers. “

Yesterday, Minister of State for Manpower Sam Tan said that he was deeply saddened by the accident. Speaking at a Workplace Safety and Health forum, he said: “The investigation is still ongoing, but the worker who was killed can’t be brought back to life. We must make sure that safety comes first.”

The MWC yesterday also released the name of a 41-year-old worker who died in a separate incident last Friday. Chinese national Zheng Chengfei fell to his death from a building under construction in Sembawang. MWC said it has learnt that the employer will be filing a work injury compensation claim.

The employer will also facilitate arrangements for the worker’s next of kin to travel to Singapore, and to send his body home.