What Is Sexual Harassment In Today's Workplace? 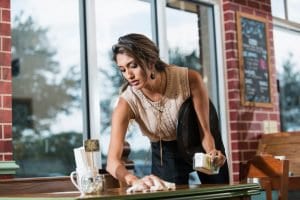 Servers and others in the hospitality industry are some of the most common harassment victims.

Has the twenty-first century seen the beginning of the end of sexual harassment in the workplace?

I noted last week here that “sexual harassment has less to do with sex than with power disparity and misogyny… [and that] since the workplace is a microcosm of the world at large and sits on the fault lines of society’s major issues and volcanic changes, we can expect no end to these cases.”

What Is Workplace Sexual Harassment?

It generally consists of two variants springing from Title VII’s prohibition against gender discrimination: hostile work environment, which can consist of a whole range or continuum of unwanted acts or behavior that are either pervasive (often or repeated) or severe. And quid pro quo – asking/demanding sex in exchange for workplace favors or to prevent workplace adverse actions.

Who Is A Harasser?

Anybody may be a workplace sexual harasser, not just coworkers or others employed by the same company. Actionable sexual harassment is not defined by who is doing it, but is a matter of the creation of a hostile workplace that remains unremedied when the employer has notice of it – irrespective of who is doing it. Could be a co-worker. Could be the FedEx courier, or the IT vendor. Could be a client or customer.

Or could be a 400-pound guy sitting on his bed (and sending dirty pics to your work email).

It’s not who, as much as it is what and where. And if the boss knows about it.

Unless the boss is doing it.

Who Is At Risk?

Not surprisingly, those at risk are the most vulnerable workers, be they isolated in farm fields, or in factories, or in a large white-collar company (just read the daily news). And not just women, though they make up the most commonly harassed group by far.

And the group of vulnerable employees includes, for example, high-powered folks such as female barristers in the UK. Indeed, a survey last year found that about 40% of female barristers have suffered harassment and discrimination, but only half of those reported it because of “concern about the impact on their career,” and because half of those who did “were not satisfied with the response.”

Respondents’ comments included: “A male solicitor told me in exchange for favours he could give me work” [quid pro quo harassment]; “I experienced extreme sexual harassment during pupillage from one of my pupil supervisors”; and “It was an occupational hazard that senior males might act inappropriately with young women at the bar.”

But let’s turn our attention to a group that comes up in all too many harassment cases either reported to the EEOC or reported in survey after survey: hospitality workers, a/k/a waitresses.

According to a Massachusetts newspaper, a lawsuit was settled last year against a diner for $ 200,000 in which it was alleged that “an unbearable and hostile work environment” was created where “female employees of the diner, primarily waitresses, were regularly subject to sexualized commentary, catcalling, whistling and unwanted touching and advances from the cooks.”

The cooks allegedly “forced unwanted hugs on waitresses or found other ways to touch them,” including “`jumper cabling,’ in which cooks would squeeze the waist of a waitress from behind, ‘rat tailing,’ in which twisted kitchen towels were used to strike waitresses in the rear, watching pornographic videos on cellphones and laptops and inappropriately accosting female workers in the freezer.”

“The owners took the position, both explicitly and implicitly, that the cooks’ behavior was to be tolerated because the cooks were hard to replace, while the waitresses were not.”

Just a couple of months ago, there was a news story from Canada about an academic study finding that “Female servers have to put up with a lot of sexual harassment on the job.” The study “found low wages and a dependence on tips makes some female servers more vulnerable to sexual harassment from customers and colleagues.”

Said one server: “You’re terrified to go and say anything just because then you have the risk of being let go, or just not having the good shifts, being the black sheep of the staff.”

And a new suit brought against a restaurant by the EEOC starkly illustrates the situation. As the EEOC noted, “This incredible case – where an abusive manager allegedly harassed one sister and then another – reinforces the crucial need for employers to take appropriate action to stop unwelcome sexual com­ments and misconduct in the workplace.” The complaint alleges that “the assistant manager touched both women inappro­priately.”

Finally, we turn to Australia, where Dominic Powell reported on a survey which found that nine in 10 hospitality workers “have experienced sexual harassment at work.… [it] also revealed 86% of hospitality workers have felt unsafe or at risk in their workplace, and close to half believe employers do not take sexual harassment in the workplace seriously.”

“The stories people have told us are horrible. Every day young women go to work feeling unsafe, in fear of being groped, humiliated or threatened by customers or managers,” said one of the survey sponsors.

All of this is pretty depressing. And a lot of this could have been prevented.

What Is To Be Done?

I have always advised that, along with proper training, a top-down culture of zero tolerance is important. Employers should understand that, from the top down, an anti-discrimination and anti-harassment tone and policy must be set, and all management personnel as well as line workers must be trained and educated in the basics of discrimination and harassment law, and compliance and its application in the workplace.

This EEOC case sort of proved my point – but, sadly, in reverse: a top-down culture of harassment was created by a warehouse manager who “regularly subjected female workers to inappropriate sexual comments, gestures, propositions and physical touching. He also offered several female workers money in exchange for sex. … the manager’s sexual harassment was so well known in the warehouse that male workers followed his lead and harassed female employees through inappropriate sexual comments and gestures.”

They followed his lead …

An employment lawyer commenting on the Australian survey discussed above said it right: “Business owners should view workers’ wellbeing as important as having the ‘right fire safety equipment.’”

He continued: “Employers need to know this is a workplace health and safety issue. Even if the assault is at the lesser end of the scale it can result in mental health injuries, which are just like any other injury under work health and safety laws.”

Having “the right fire safety equipment.” Sounds like a good takeaway.

Richard B. Cohen has litigated and arbitrated complex business and employment disputes for almost 40 years, and is a partner in the NYC office of the national “cloud” law firm FisherBroyles. He is the creator and author of his firm’s Employment Discrimination blog, and received an award from the American Bar Association for his blog posts. You can reach him at Richard.Cohen@fisherbroyles.com and follow him on Twitter at @richard09535496.