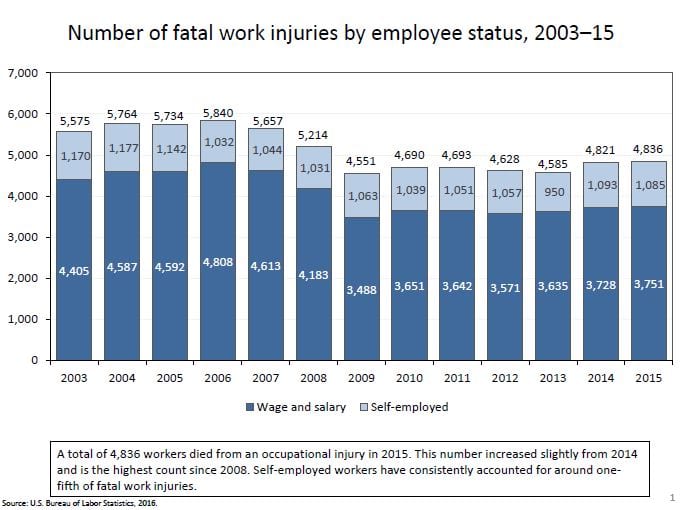 Amidst the groundswell of information, energy, and genuine excitement around last week’s March for Science and the upcoming People’s Climate March, there’s another global and national event that should not get lost in the mix.

This one relates to workers—you know, those dedicated and hardy souls that are the backbone of what makes America great.

Workers, the engine of our economy, are also our partners, children, relatives, co-workers, friends, and neighbors. And too many of them get more than a paycheck for their efforts (recognizing that the paycheck they do get may be less than a living wage). Some of our nation’s workers die, get sick, injured, or become disabled because of workplace exposures, hazards, and conditions. And these workplace incidents are largely (very largely) preventable.

April 28— Workers Memorial Day. The day each year that we recognize, commemorate, and honor these workers. It is also a day to renew the fight for safe workplaces. It’s more important now than ever.

Data give us a quantitative look into these preventable events, but they don’t begin to capture the horror and loss they entail. Just imagine having to deal with the knowledge that a loved one was suffocated in a trench collapse; asphyxiated by chemical fumes; shot during a workplace robbery; seriously injured while working with a violent patient or client; killed or injured from a fall or a scaffolding collapse; or living with an amputation caused by an unguarded machine.

Or the heartache of watching a loved one who literally can’t catch a breath because of work-related respiratory disease. Or is incapacitated by a serious musculoskeletal injury. Or has contracted hepatitis B or HIV because of exposure to a blood-borne pathogen at work.

I could go on—but you get the picture.

What the latest data tell us:

That’s about 13 people every day! In the United States!

The number of immigrant workers killed on the job reached a nearly 10-year high, with Latino workers having an 18% higher fatality rate than the national average. Work in construction, transportation, and agriculture continues to be the most dangerous, and workplace violence remains a growing problem for workers. Older workers are also at high risk, with those 65 or older 2.5 times more likely to die on the job.

Non-fatal cases: And then there are the nonfatal injuries and illnesses. Employers reported approximately 2.9 million of them in private industry workers in 2015; another 752,600 injury and illness cases were reported among the approximately 18.4 million state and local government workers (1).

In addition to the physical and emotional toll these preventable incidents take on workers and their families, they exact an enormous economic cost. The societal cost of work-related fatalities, injuries, and illnesses was estimated at $ 250 billion in 2007 based on medical costs and productivity losses (2). I suspect these costs are well higher today (1). They are certainly not less.

Glass half empty, half full

Despite these data, it’s important to note that workplace health and safety in the U.S. is a LOT better than it used to be, due in large measure to the struggles of labor unions and working people, along with the efforts of federal and state agencies. Workplace fatalities and injuries have declined significantly, and exposures to toxic chemicals have been reduced.

This progress is a testament to the effectiveness of health and safety regulations and science-based research.

[OSHA and NIOSH were established by Congress in 1970; the Mine Safety and Health Administration (MSHA) was establishes in 1977 (although the first federal mine safety stature was passed in 1891). OSHA’s statutory mandate is “to assure safe and healthful working conditions for working men and women by setting and enforcing standards and by providing training, outreach, education and assistance.” NIOSH was established as a research agency focused on the study of worker safety and health to empower employers and workers to create safe and healthy workplaces. MSHA works to prevent death, illness, and injury from mining and to promote safe and healthful workplaces for U.S. miners.]

Despite this progress, there’s much more to be done. It’s simply not acceptable that each and every day in this country, on average 13 workers die on the job as a result of workplace injuries.

It’s not acceptable that each year, many thousands more die from occupational diseases. And that millions sustain non-life threatening injuries and illnesses that impact their daily lives.

The human, social, and economic toll is simply far too high. [Remember: this is all largely preventable.]

With the current anti-regulatory fervor and anti-science fervor in our nation’s capital, the protections, safeguards, science, and research of these agencies are at great risk. We have already seen the Trump Administration and congressional actions roll back some worker protections and block or delay others. Agency budgets and programs are on the chopping block.

Now, more than ever, we must be vigilant and vocal in our support for worker health and safety safeguards and protections.

So, as we get ready to head out to work today and tomorrow , let’s pause for a minute on Worker Memorial Day to remember those workers who have lost so much because of their jobs— along with those who continue to produce the goods and services we all enjoy, depend on, and often take for granted. And let’s get ready to use our voice, votes, and collective power to demand and defend rules, standards, policies, and science-based safeguards that protect this most precious national resource—our working men and women.

UCS will keep you posted on how and when you can weigh in. Let’s do this.

Posted in: Science and Democracy

Support from UCS members make work like this possible. Will you join us? Help UCS advance independent science for a healthy environment and a safer world.