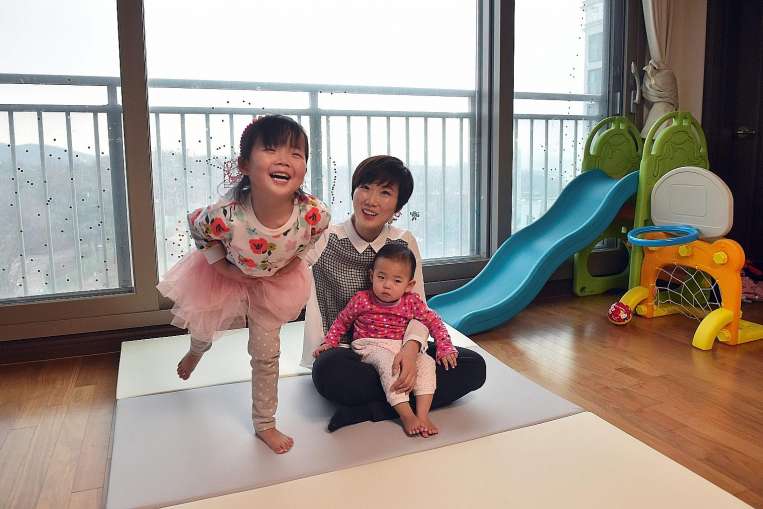 SEOUL • Trying to raise the world’s lowest birth rate is among the missions of South Korea’s Welfare Ministry – a challenge starkly illustrated when one of its own working mothers died at her office.

The 34-year-old woman was an elite employee who had passed the highest category of the highly competitive civil service entrance examinations.

A mother of three, she had returned from maternity leave only a week before her death last month, and immediately went back to working 12-hour days.

She returned to the office on the Saturday. The next day, she was there again at five in the morning to finish early and take care of her children later in the day, according to her colleagues. Instead, she suffered a heart attack and they never saw her alive again.

Her death has prompted soul- searching over the difficulties faced by overburdened and exhausted working mothers in a deeply workaholic and male-dominated society – which desperately needs to encourage more births.

South Korea’s fertility rate – the number of babies a woman is expected to have during her lifetime – has been declining for years and now stands at 1.2, the lowest in the world in the latest World Bank tally. The global average is 2.4.

South Korea’s fertility rate – the number of babies a woman is expected to have during her lifetime – has been declining for years and now stands at 1.2, the lowest in the world in the latest World Bank tally. The global average is 2.4.

Experts call it a “birth strike”.

The civil servant who died has not been named, but Ms Kim Yu Mi, a 37-year-old IT engineer with two young daughters, said she could “totally relate to her”.

“It is exactly the reality for all working mums all across South Korea,” she said.

She was one of the minority of South Koreans who took advantage of the legally available one year of parental leave, which is paid for by the government.

Since 2006, the authorities have pumped over 100 trillion won (S$ 124 billion) into programmes to encourage people to marry young and have larger families. But they have failed to arrest the trend.

Ms Kim describes herself as “extremely lucky” for being allowed to go back to work. “At least my employer did not kick me out when I asked for maternity leave,” she said. “In the past, female employees like me were simply told ‘Go home and never come back’.”

But when she returned to the office after her first maternity leave, she added, she often worked past 9pm, making reading a bedtime story impossible.

“Sitting with my child to play and eat dinner together was an unimaginable dream,” she added.

According to official statistics, the average South Korean works 2,113 hours a year, the second-most among member nations of the Organisation for Economic Cooperation and Development, where the mean is 1,766. Mexico ranks No. 1. But local surveys indicate the reality is even worse, and, as in Japan, there are regular reports of “death by overwork”.

At the same time, in double-income families, men spend only 40 minutes a day on house chores or childcare, compared with three hours for women.

The cut-throat corporate culture and a deep-rooted patriarchy that sees women as the sole family caregiver are pushing ever more women to shun marriage, said sociology professor Lee Na Young at Chung-Ang University in Seoul.

The vast majority of children are born in wedlock in South Korea, but the marriage rate has steadily declined to hit a record low of 5.9 per 1,000 people last year.

In the wake of the civil servant’s death, the Welfare Ministry has banned working on Saturdays and moved to discourage weekday overtime.