More workers sustained non-fatal workplace injuries last year, though the number of those who died on the job edged to a new record low.

Forty-one workers died of workplace injuries, one fewer than in the year before. The construction sector remained the top contributor of deaths, with 14 fatal accidents, two more than the year before.

Meanwhile, 313 more cases of major and minor injuries were registered, with an area of concern in the pronounced increase in major injuries from slips, trips and falls, the Ministry of Manpower (MOM) and the Workplace Safety and Health (WSH) Council said yesterday.

This increase was seen across various industries, including those traditionally of lower risk.

In a statement, the MOM and the council said the trend of declining workplace fatalities had continued since the Workplace Safety and Health Act was enacted in 2006.

“The improvements have been achieved through making companies and individuals liable for safety outcomes, rather than observing prescriptive standards, imposing stiffer penalties and extensively engaging and educating industries,” said MOM and the WSH Council.

The wholesale trade sector and real estate services were flagged for an increased number of fatalities, with five and four cases respectively. MOM and the WSH Council said these two sectors previously had few fatal injuries and called for more vigilance.

Falls from height, slips, trips and falls, and vehicle-related incidents remained the top causes of fatal injuries, although the number of incidents involving vehicles fell to seven, from 14 in 2017. The authorities said the decline was due to continued inspection and engagement efforts.

The number of dangerous occurrences, such as explosions or cranes collapsing, decreased by 34 per cent from 2017, while occupational diseases fell by 30 per cent. 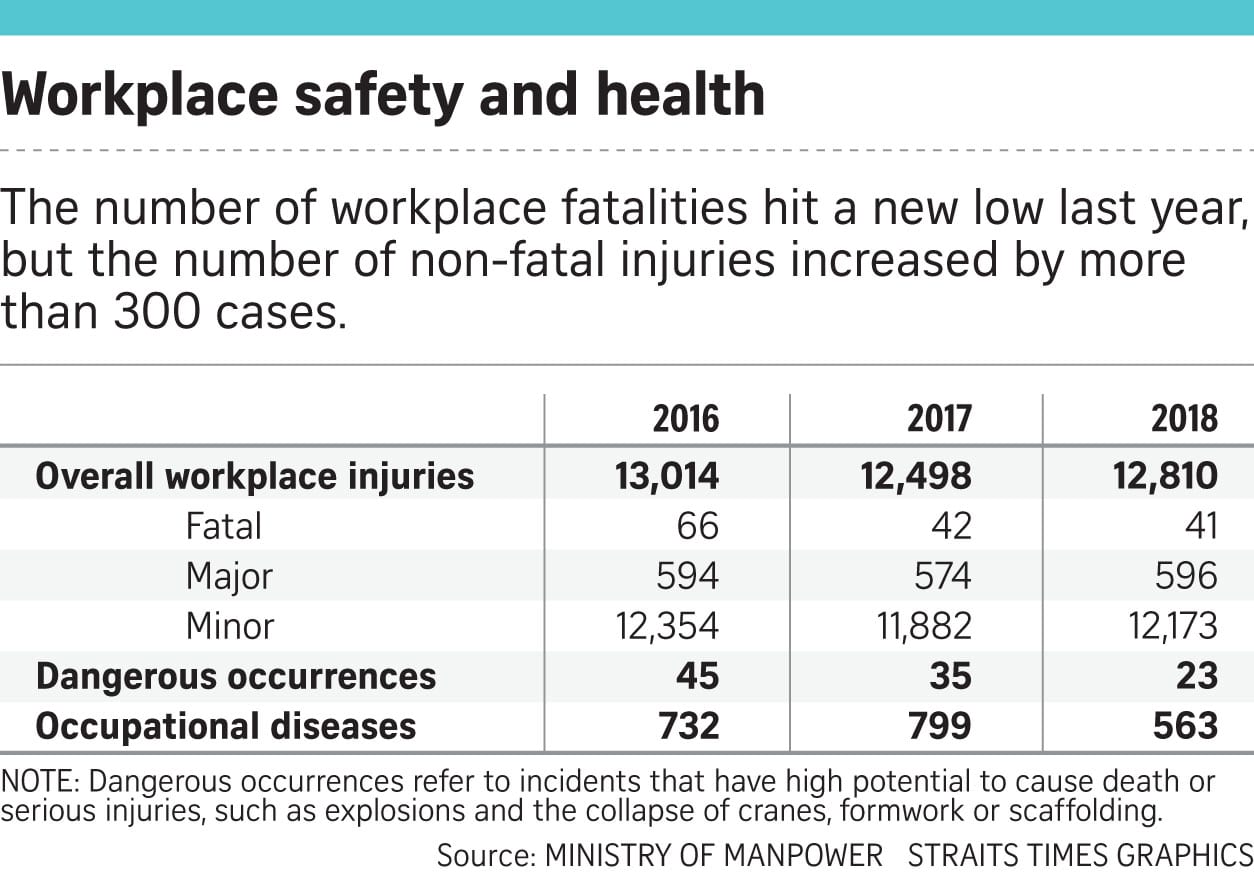 Nonetheless, Minister of State for Manpower Zaqy Mohamad said the rise in workplace injuries was a cause for concern. “Some businesses may not realise the business benefits that good workplace safety and health can bring, and perceive improving WSH as costing time and money,” he said.

Mr Zaqy said the WSH2028 Tripartite Strategies Committee, which was set up last year, has been studying how to align firms’ commercial interests closer with good WSH outcomes. Details will be announced in April.

Mr John Ng, chairman of both the WSH Council and the WSH2028 panel, said both bodies will seek to grow a culture of prevention and trust that starts with the top leaders in companies.

He said: “We have done good work in lowering workplace fatalities, particularly in the manufacturing and transport and storage sectors, as well as bringing down the number of vehicle-related fatal accidents. But one worker injured is still one case too many.”